Five retired Mine Detection Dogs from Iraq are on their way to new homes. These remarkable animals, which have spent the past six to eight years ‘sniffing out’ landmines and saving lives in Iraq, are being adopted by American families through an innovative partnership between SPCA International ( www.spcai.org ) and the Marshall Legacy Institute ( www.marshall-legacy.org ). 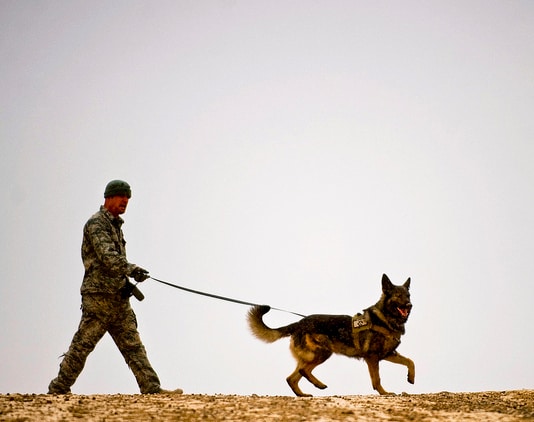 MDDs Blek, Malysh, Miso, Nero and Rocky were specially trained to detect the explosive odors found in landmines. Landmines continue to plague much of Iraq: the result of multiple conflicts spanning more than 30 years. Because these weapons of war are buried, they are hard to find and continue to kill and injure hundreds of Iraqi civilian men, women and children each year. Dogs have a keen sense of smell and are used in Iraq to safely and effectively locate mines that are then carefully extracted from the ground.

During their years of service with the Iraqi Mine and UXO Clearance Organization, Blek, Malysh, Miso, Nero and Rocky sniffed out over 90 acres of mine-contaminated land in and around Basra and Baghdad. The land they searched was used to build the College of Agriculture in Baghdad, and for infrastructure purposes in southern Ramallah. These dogs have truly helped to make Iraq a safer and better place.

Now that they are retired, Blek, Malysh, Miso, Nero and Rocky deserve loving homes! This is where SPCA International and MLI come in. SPCA International’s Operation Baghdad Pups program provides veterinary care and coordinates the complicated logistics and transportation required to reunite service men and women back in the U.S. with the dogs they befriend while on deployment in the Middle East. The Marshall Legacy Institute, a non-profit organization dedicated to helping mine-affected countries help themselves, provides highly trained Mine Detection Dog capacities to help accelerate the pace of mine clearance operations. With support from the U.S. Department of State and private donors MLI has donated over 170 lifesaving dogs to 11 countries to date. In Iraq, MLI has replaced the retired dogs with four new dogs, sponsored by the U.S. Department of State, Raytheon, and Woodlands High School.

When SPCA International found out that MLI was looking to identify new homes for 5 retired MDDs from Iraq, they generously offered to transport the dogs to the United States through the Operation Baghdad Pups program, and to locate retirement homes for them. SPCA International is currently finalizing adoption agreements for all 5 dogs.

By March 27th all 5 dogs will have arrived in Washington DC from Iraq, and will subsequently be sent to their new homes. OBP and MLI will hold an informal meet and greet at the Dulles Executive Pet Center at 1:30pm on March 27th to give others a chance to meet Blek, Malysh, Miso, Nero and Rocky, to celebrate the successful transport of these dogs and subsequent adoption to retirement homes, and to learn more about Operation Baghdad Pups and MLI.