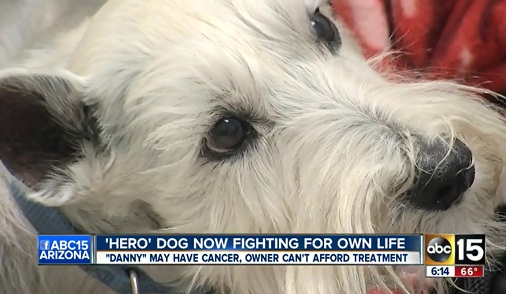 Danny is a 12-year-old miniature Schnauzer that has spent most of his life in Arizona as a service dog.  He’s alerted people when they had low blood sugar, and saved his owner’s life last January.  Now he needs to be saved.

Danny has been frequently tilting his head and is having trouble keeping his balance.  An exam was performed on Tuesday, and doctors are worried the little dog’s cancer has returned.

His owner, Bethe Bennett, cannot afford the costly treatment it would take to save him.  She owes her life to him, and is desperate to keep her companion.  Earlier in the year, Bethet took a hard fall on the kitchen floor and broke her femur.

“I knew I was seriously hurt because I was passing out every time I tried to move I would pass out,” Bethe said.  “When I would come back around I was vomiting.”

Danny licked her face until she woke up again.  She asked him to get her the phone.  He was rusty; it had been years since he heard this command, but after a few minutes Danny remembered and brought her the phone.  She called 911, and received the help she needed.

“I knew I was in shock.  I’m in the medical field so I knew I was seriously hurt,” she said.  “I would have laid there and probably died.  Nobody was coming to check on me until Monday or Tuesday.”

Now Bethe and Danny need the public’s help.  Bethe has been out of work the largest bone in her body was broken.  She has been struggling to pay her own medical bills, and has no way to pay for Danny’s treatment.  She is desperate to save the dog who saved her.

“I think he’s earned it,” Bethe said.  “He’s given 10 years of his life to make others happy and I think, it’s very hard, he deserves it.   He deserves the help.”

Bethe has set up an account for any kind-hearted animal lovers who are willing to help: