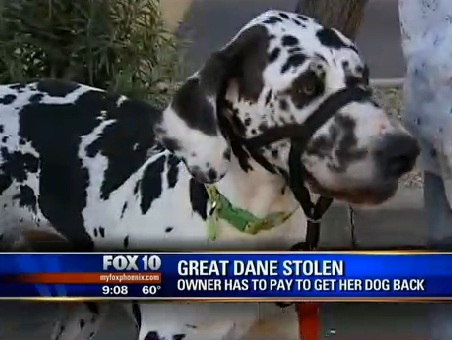 Phoenix, Arizona resident Reena Bradford was confounded and distressed when her Great Dane was stolen.  Her dog, Dulce, was soon dropped off at Animal Control, but they demanded Bradford pay a hefty bill before they would release her.

Dulce was snatched from Bradford’s car outside of a Petsmart over the weekend.  A local news channel ran the story, and the dog was quickly dumped at Maricopa County Animal Care and Control on Monday.  Bradford went to pick up Dulce, but before she was allowed to take her home, Animal Control claimed she owe them $231.

“It was for intake fees, release fees, vaccinations fees, rabies shots, tags, license renewals, everything she could think of,” she said.

Bradford was outraged that they wanted so much money for a dog that was already hers, when she could adopt a stray dog from them for only $51.

“These are just fees assessed for us through county law,” explained Audie Greybear of Animal Control.

Bradford reluctantly paid, but only because she wanted Dulce home again.  She left without getting the shots or the microchip.  Dulce’s groomer corroborated Bradford’s insistence that the rabies shots were up-to-date.

On Monday, Animal Control and two police officers showed up in a dog-catching van, claiming Bradford had an unlicensed, unvaccinated dog.  Her veterinarian spoke to police on the phone and further confirmed the current rabies shots.  The police apologized for the inconvenience and departed.

“If you have a current rabies vaccination current license and pet microchip it’s a free ride home,” said Greybear.

Animal Control says they might issue a partial refund, for the rabies shots, provided Bradford can show proper documentation.  However, they will not refund the microchip fee, despite the fact that Dulce did not get one.  Apparently the option of having your dog microchipped is no longer optional, and you have to pay for a service you do not even use.

“It was unbelievable the way I was treated after my dog was stolen,” Bradford said.