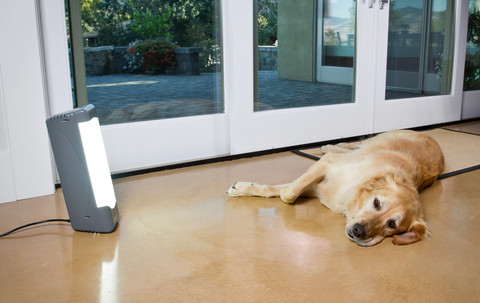 Winter can be a rough season for many. The colder days and fewer hours of sunlight can take its toll. Some vets believe that humans aren’t the only ones who can suffer from Seasonal Affective Disorder, or SAD.  Your four-legged companions can also be suffering from SAD and may benefit from a light box, a common treatment for humans with SAD.

Max Marvin began using a sleep box on the advice of a sleep specialist to help him with severe insomnia. Marvin’s light box not only began helping him but his golden retriever Luke as well. “Luke and I were both basking in the sun every single morning and I found that he was just completely drawn to the light,” said Marvin. “Luke would just be on his back enjoying the light, happy as can be.”

Marvin researched and consulted with veterinarians and found out pets could suffer from SAD just like humans. Realizing that light boxes could help pets too Marvin founded Pawsitive Lighting partnered with a British light-therapy device manufacturer and developed the Sol Box, designed specifically for pets.

“Pawsitive Lighting was founded because no one was providing a holistic approach to the treatment of depression in pets,” Marvin said. “Increasingly vets prescribe Prozac and other antidepressants in an attempt to boost their serotonin levels. That seemed rather cruel.”  A light box stimulates the brain to produce serotonin, which increases a human or dog’s feeling of well-being.  If your dog seems to be more lethargic and moody during the winter months a light box might do the trick.