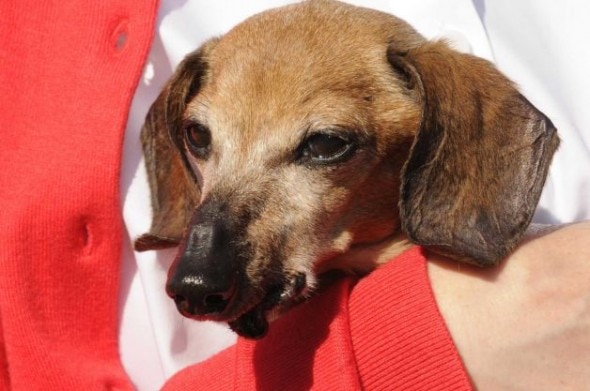 It’s a story with a fairy tale ending about Lily, a tiny 5 pound dachshund who was left to die inside a cardboard box  that was taped shut.  And the best thing about this fairy tale is that it’s a true story.  When David Gregory found Lily 2 1/2 years ago she had been abused, had a bad infection that had not been treated and she was missing parts of her lower jaw.

Gregory called 911 and police took the sick pup to the animal shelter in Schoharie County NY, and from there she went to the animal hospital.  Cyndi West, a lifelong lover of dachshunds, got a phone call from the shelter and went to see the recovering dog.  It was love at first sight, for both West and the dog, who was renamed Lily because it was just before Easter.  “I could not believe it — she was just skin and bones,” said West.  “She just looked up at me. It was like, ‘Help Me!'”  And so she did, making the poor dog a member of her family.

A local paper wrote a story about Lily, and suddenly people came forward to identify Lily’s abusers, who were found guilty of maltreatment and sentenced to community service.  That summer West ran into an old high school friend, Meg Anderson Argo, an artist.  Upon hearing Lily’s story Argo wanted to do something and the pair decided to collaborate on a children’s book, along with Argo’s daughter Gabrielle.  Titled “Lily in the Box”  the book states “Lily is a kind, gentle dog with many friends.  Lily’s life was not always happy, though. This is a true story about a very special little dog and the journey she took that brought her to where she is today.”

But this is not just about telling Lily’s story.  Around the same time, the animal shelter was raising funds for a new building and had a substantial amount set aside.  Then Tropical Storm Irene struck and all the money had to be diverted to repair the existing shelter, which had water damage, black mold, bug infestation and damage to its ceilings and walls.  West and Argo decided then to donate proceeds from the sale of the book to fund the new shelter. 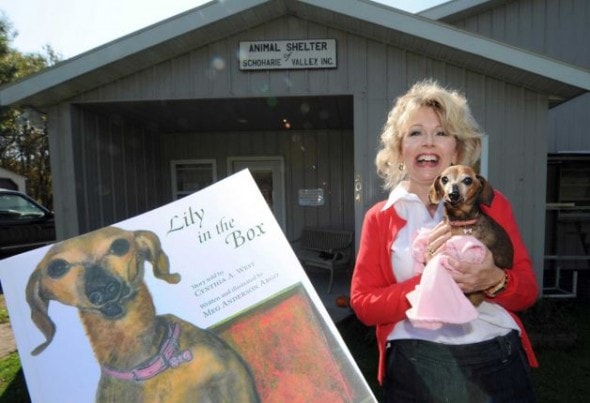 So thanks to the acts of many selfless and caring people, out of a terrible situation came a wonderful new life for Lily, as well as tremendous hope for other animals everywhere.  West and Argo have dedicated  the book to “all the abandoned, unloved, unwanted dogs and cats that never expected love and to those who rescue them and love them and expect nothing.”

The book ends with “There are fields to run through, flowers to smell and butterflies to chase.  Lily is happier than she ever has been, for she has found her forever home.”