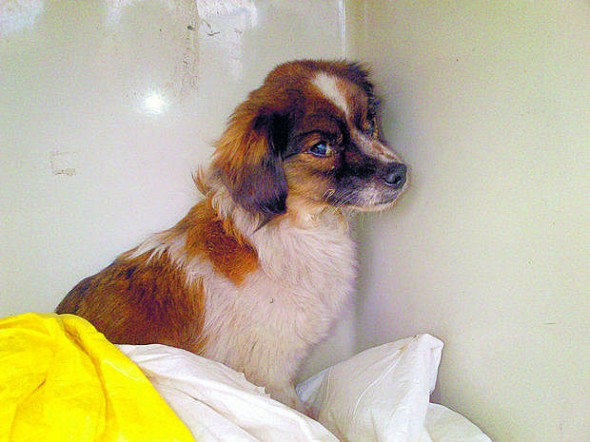 Lincoln Tunnel-bound traffic ground to a halt on Wednesday morning when Port Authority police closed two lanes of route 495 in Union City, New Jersey, to save a small dog.

The dog was trapped in “a fenced-off area with rocks,” according to North Hudson Regional Fire and Rescue Chief Frank Montagne. “This dog was basically living on the side of this cliff for what people are saying was a week or more.”

Traffic was shut down for “a little over an hour,” Montagne said. A handful of crews were needed for the job – police from Union City and Port Authority, and a company from North Hudson Regional Fire and Rescue.

To reach the stranded pup, firefighters “had to put up a ladder to go up over the fence (at 30th Street),” Montagne explained. “We have to traverse the weeds and brush to get to him.”

“The rescue was precarious because we had to climb that cliff,” said Union City Animal Control Officer Geoff Santini. “God forbid the dog had gotten scared and leapt into the traffic. That would have been horrific.” 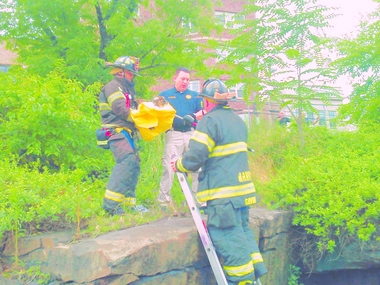 The team eventually captured the dog, who Santini said had eye infections and a “banged-up and infected” leg. The dog also appeared to be malnourished.

So far the two to three-year-old dog, who has not been claimed, is recuperating at the Summit Animal Clinic in Union City.

As to how the poorly dog managed to find itself in such a precarious position, Santini surmised the it “either found a small opening there himself, or someone threw him over the fence.”

Montagne was relieved the rescue was accomplished “without the dog or any of the firemen falling.”

“Everybody working in conjunction – that’s how we got this done,” Santini concluded.