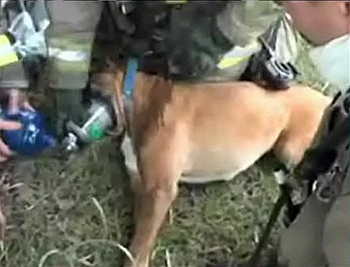 Long Beach firefighters are being commended for saving the life of a dog overcome by smoke inside a burning home.

Firefighters responded to a house fire on Bentree Avenue after smoke was spotted at 10:28 a.m. on Thursday. They were able to get the blaze under control quickly, and witnesses saw firefighters racing out of the house with the gasping dog in their arms.

Authorities say they used a “canine resuscitator” to revive the dog after it became unresponsive.

“There was a group of about six firemen around the animal like they would a human being, and they were starting IVs, giving him oxygen. They put him on a heart monitor. I believe they gave him medication by IV,” said witness Paulette Wellborn, who was impressed with the effort of the firefighters.

“I’ve owned dogs all my life, and I would wish something like that to happen to my dog if something happened to my dog,” she said.

The blaze was quickly knocked down and a primary search for victims was immediately conducted throughout the smoke filled home.  It was then that Firefighters discovered what appeared to be a lifeless medium sized dog on the bathroom floor.  They quickly scooped up the dog and took it to the front of the house and began treatment with a canine resuscitator and administered high flow oxygen.

After assisting with ventilations the dog’s respiratory rate and drive greatly improved and it was no longer lethargic.  The dog was then taken to a local area veterinarian for further treatment and evaluation.

No one was home at the time of the incident and there were no human injuries.  Thanks to the valiant efforts of the Firefighters, this dog did not succumb to its injuries and is doing well.

The cause of the fire is currently being investigated by Fire Investigators.  There were a total of 10 Fire Department apparatus and 26 personnel operating on scene of this fire that took place in the 8th Council District.