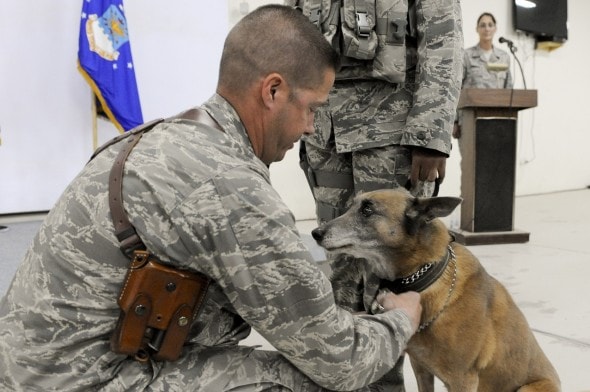 This afternoon at the Mountain Home Air Force Base in Idaho a retirement ceremony is being held for the longest-serving military working dog in the Department of Defense. For twelve years Tanja has served as a detection and patrol dog and is now looking forward to retirement with her current handler.

Tanja, a Belgian Malinois, worked with six different handlers over her career. “She has deployed five times in various countries around the world and has been a definite asset during her military career,” said Tanja’s former handler Staff Sgt. Robert Wilson. Dogs and their handlers spend all their time together. They train, eat, sleep and fight side by side. “I am so glad I had the opportunity of working with her,” said Wilson. “She was definitely the best dog I have ever had.”

Wilson also went on to tell a story from his deployment with Tanja. Not only did Tanja locate an explosive device inside a third-country national vehicle but further search revealed that stolen classified documents were hidden inside the vehicle. Tanja efforts prevented this information from being stolen.

Tanja will be living out the rest of her life with her last handler, Tech. Sgt. Roseann Kelly. “I don’t think she will have any problem adjusting to being a civilian since she’s been preparing and practicing for house-dog life for years,” joked Kelly. “She loves to lounge around and play games like most dogs do. I love the military working dogs and am excited to adopt Tanja.”

Both Kelly and Wilson are glad Tanja will get the retirement she has earned. Kelly said, “She has served her country and can now look forward to enjoying herself and relaxing.”