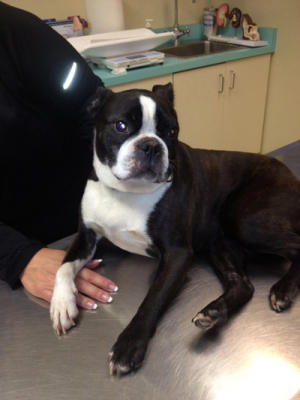 The boston terrier disappeared from his Palo Alto home over 4 years ago when a gate was left open.   His family searched desperately but no one ever reported having seen the adorable black and  white dog, and eventually his family lost hope of ever finding him.  They speculated that Oreo must have run to the park near his home, where he was often walked and was scooped up by someone watching a soccer game that happened to be going on that day.

Then last week a humane society officer spotted Oreo wandering the streets, and noticed he had a leg injury.  He picked up the injured dog and brought him to the San Mateo shelter where his microchip was scanned, revealing his identity.  “To get a dog back that you thought was gone for good is pretty crazy,” said Brandon Springer, adding that Oreo belonged to his grandmother, Ann Guglielmelli, who died last May.

Scott Delucchi, a spokesman for the humane society says “This story illustrates the importance of microchips, which can be a lost pet’s ticket home,” adding “Too many people don’t know how inexpensive this can be and how easy of a process it is.  Hopefully, this happy ending will cause more people to consider this permanent form of identification for their pets.”

Microchipping costs only $30 and does not require a scheduled vet appointment.  Oreo was in good health other than his injured leg which may be the result of being hit by a car, or a case of abuse.  In any event he is back home where he belongs, though sadly his original owner, Springer’s grandmother, passed away last year.  But Springer’s grandfather is thrilled to have him back.  “He was stoked,” said Springer. “He said, ‘That’s my dog. I’m taking him home!'”