When Lonnie was found, his skin was in such bad shape, that one would almost miss the fact that he was a dog at all.  However, thanks to the love and care of his rescuers, Lonnie is doing so much better today.  After just about a month, his skin was healing beautifully, and he starting to look so much better.

According to Animal Aid Unlimited in India, Lonnie loves to play.  He so full of energy, and gets along pretty well with other dogs.  But a month ago, Lonnie was barely moving at all.  Described as listless, flat, and covered in mange, what was there to be all that excited about for him? 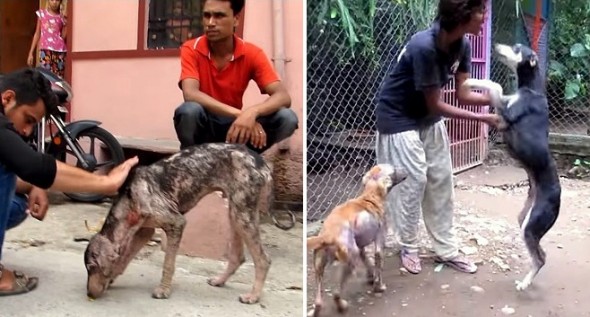 Mange is a really awful condition for a dog to have to suffer through.  Basically, it’s a skin disease that’s caused by parasitic mites, and the itching becomes so bad, many dogs scratch the skin right off of themselves in an attempt at relief.  If left untreated, it can even be deadly.

Animal Aid Unlimited does a lot of really great work all over the world.  They really came through for Lonnie here, and he’s actually got a very good shot at a full, happy and healthy life.  If you’d like to learn more about them, or donate to the cause, click here for more details.