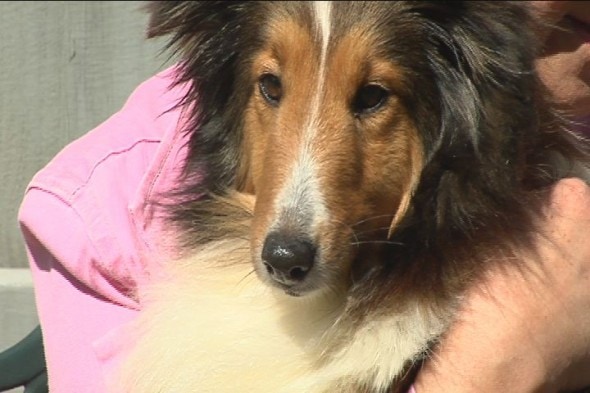 When Karen Clendenin’s rescue dog Punkin Pie went missing she was devastated. On Tuesday she was finally reunited with her dog after a year apart.

The day Punkin Pie went missing is a day Clendenin says she’ll never forget. “We had a martingale collar on her. She wiggled out of it and just took off running.” said Clendenin. Punkin Pie was scheduled to be spayed and receive a microchip just the day after she went missing. For months Punkin Pie’s family searched for her, posting flyers and putting her paper in the local paper. There were several sightings of Punkin Pie but the dog’s skittish nature made her hard to catch.

On Monday morning Clendenin’s own daughter spotted Punkin Pie while driving her son to school. Punkin Pie was finally caught with the help of Animal Control director Pat Smith and the use of some Vienna sausage. Remarkably Punkin Pie was in good health and had managed to gain weight while on the run for a year. Punkin Pie had been sleeping in the woods because she was too afraid to go near anyone but one lady managed to help the dog out. “A really sweet lady had been putting dog food out…and I guess at night or anytime to she could get up there, Punkin Pie was getting food.”

Since Punkin Pie has returned home she has been receiving lots of attention and pampering. “Last night she got up in our bed and we fed her bacon. How much better can it get than that?” said Clendenin. “So lots of love and treats.” From now on Clendenin plans to equip Punkin Pie with a harness when she goes outside.