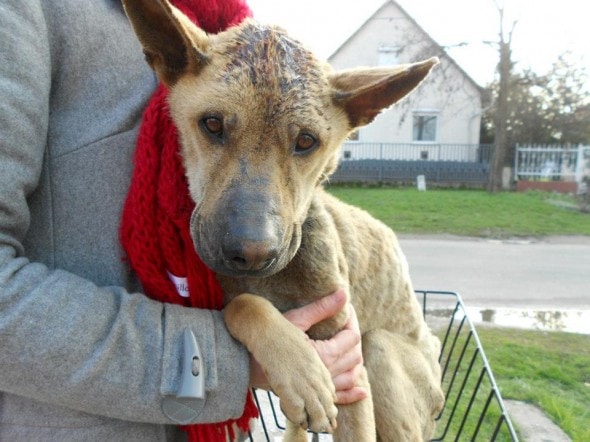 A dog named Lucky has been aptly named, as he was recently rescued from what could have been a slow and painful death.  A woman in Füzesabony, Hungary saw him walking along a busy street and hounded him until he could be caught and taken in for treatment.

The woman, named Caroline, was driving when she saw a very gaunt dog.  She stopped and called to him, but the fearful boy kept his distance.  She held out some canned food, but even that could not entice the skeletal dog to approach.  He trotted away, but the woman was determined to help him. 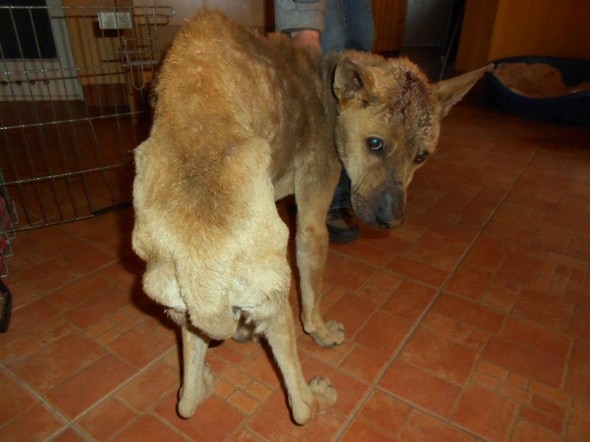 “I was going down to the bank of the river, going through private but abandoned places and gardens so I don’t lose track of him,” Caroline said.  “He was so weak that he almost collapsed various times while I was following him.  After about half an hour he walked into a garden of a family which was full of garbage and grass in the back garden.  He was planning to escape in a hole under the gate but he could not find one on that part.  I could approach him, now close enough to show him the canned food I had in my hand.  After growling a bit he started eating and in a little time he started to trust me so I could lift him up.”

By this time she was fairly far from her car – too far to carry the injured dog.  She called her sister, who had an electric bicycle.  They put him in the back and walked the bike to Caroline’s house, which was actually closer than her vehicle.

Once they were able to get close to the dog, they could see the extent of his wounds.  He had been starved, and there was a sizeable opening on the top of his skull.  It looked infected, and his brain was partially visible. 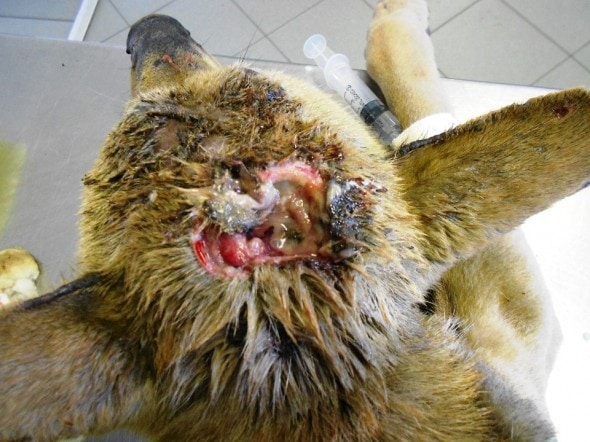 He was taken in to FAPF, the Foundation of Animal Protection in Füzesabony, where he was named Lucky.  Many dogs in central and eastern Europe are treated as little more than living trash that wanders the streets, but organizations like FAPF aim to change that perception by taking in stray, unwanted, injured and abused dogs.  They typically have more patients than they can provide for, and donations are urgently needed to afford medical care for Lucky and others like him.

There is little room for him, and Caroline already has many dogs, so Lucky is living in a crate for the time being.  He urgently needs a foster home in Hungary.  He cannot be transported outside the country because of vaccination laws and his fragile condition. 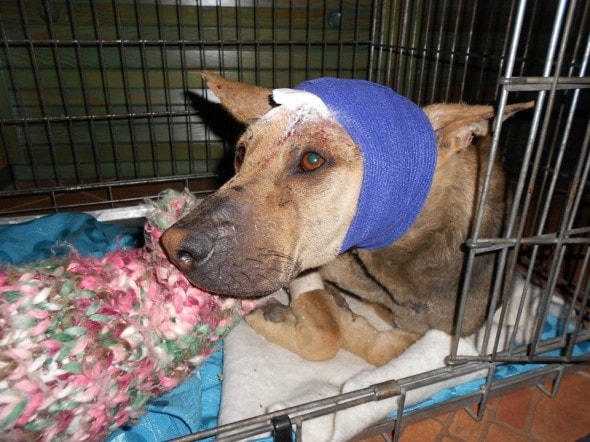 Lucky has received some treatment at the University Hospital in Budapest.  He has had an X-ray and a CT scan, as well as been given antibiotics and painkillers.  It is believed that he was struck with a hammer, and abandoned far from his “home” while in a comatose state.  He is recovering, but will need more surgery and treatment.

If you are interested in following Lucky’s story or helping defray the cost of his care, please visit:

UPDATE:  Lucky is now “reserved” – he has a potential adopter!