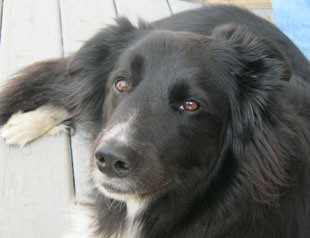 A border collie named Monty stayed by his owner’s side for 12 hours when she became stuck in a sinkhole.

Ontario resident Sandra Van Alstyne was walking with Monty one morning in the woods of Haliburton, about 150 miles north of Toronto.  They were playing with a frisbee in a muddy clearing, and a misstep caused Sandra’s leg to get stuck knee-deep in a sinkhole.

“I just walked right into it, and there was no way my foot was going to budge,” Sandra explained.  “The suction was like cement.”

Sandra shouted for help, but no one responded.  The woman and her dog were at the top of a remote hill, and the chances of them being discovered immediately were slim.  To prevent herself from sliding in any further, Sandra sat down in the mud and waited for someone to come along.

The blue sky and nice weather made the wait pleasant, but before long, it began to snow.

“It was that wet kind of snow, but it only lasted a bit. I was glad when it stopped,” she said.

Sandra worried little about her safety; Monty remained close by her side.

“Monty stayed right with me, he just snuggled up to me,” she said.  “I petted him and he kept me warm.”

She tried several times to send Monty for her husband, Gerry.  He would trot towards the road, but kept returning to Sandra.

“He stayed with me all the time.  He was so comforting.  He’s an exceptional border collie,” Sandra said.  “He chased a couple of squirrels that he heard in the bush. But he always came back.”

As day turned to night, she began to worry.  Sandra is diabetic, and feared what might happen should her blood sugar drop without having any snacks to boost it.

“I surprised myself.  I never panicked,” she said.  “But if I had to stay overnight, there probably would have been tears.”

Meanwhile, Sandra’s husband grew anxious that the pair had not returned home.  He notified police, who launched a search-and-rescue mission.  Officers, police dogs and a helicopter were all employed to help locate the missing woman and her dog.

Around 11 that night, Sandra and Monty were finally spotted.  Though they were less than a mile from home, it took searchers nearly an hour to find them.  But the ordeal wasn’t over; police now had to free Sandra without also becoming ensnared.

“The police were getting stuck themselves trying to get me,” she said.  “This was a really big hole.”

She was finally pulled free, and taken to a hospital for a check-up.  Monty was a bit shaken, but no worse for the wear.

“He didn’t sleep very well that night, but he finally ate something when I got home,” Sandra commented.  “He’s so smart, he’s really a great dog.  I could brag about him for hours.”