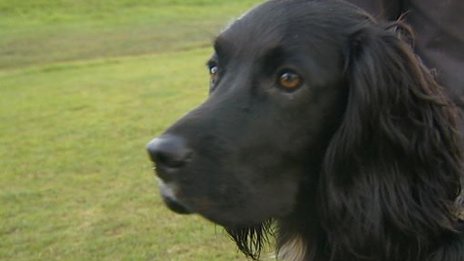 Iso is a spirited Sprocker Spaniel which may explain how he ended up at the bottom of a 160 ft mine shaft in Cornwall.  Fortunately he was found relatively uninjured the next day, but he was lucky to get out alive.  After searching fruitlessly the day he went missing, his owner Brian Saunders was discouraged but the next day someone heard faint barking come from the mine shaft and the rescue was launched.

Firefighters were called in to abseil into the mine and bring Iso to safety.  Aside from a “dented muzzle” and a small cut on his head he was in good spirits.  It is thought that he may have been knocked unconscious in the fall which would explain why his barking was not heard until the next day.  Commander Dave Carlisle, of Cornwall Fire and Rescue Service, said: “It made our day when we found him.”

Cornwall added that “West Cornwall is littered with mine shafts and after heavy rain adits open up so it is an ongoing problem.”  This particular shaft had heavy undergrowth around it so it would have taken some effort on Iso’s part to get in there, and it speculated that he was chasing something at the time.

Saunders adopted Iso after he failed to qualify as a police dog, being more interested in hunting than retrieving. A relieved Saunders said, “He’s the most intelligent dog I’ve ever owned, but he’s only two years old.  It was his enthusiasm that got the better of him, but he will be on a lead in the future.”