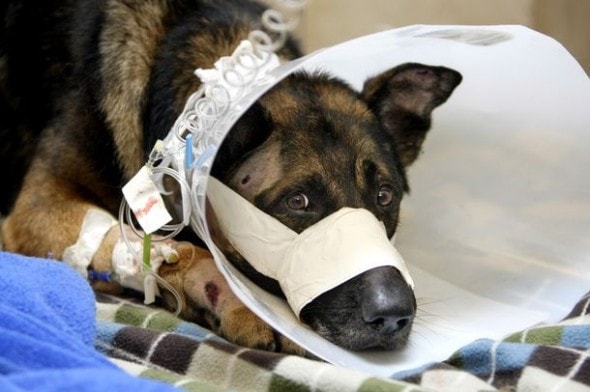 Drake may not have made it as a police dog, but he nearly gave his life trying to stop burglars from entering his owners home in West Palm Beach, California.  The 5 year old german shepherd was home alone when 3 intruders entered.  When he tried to protect his property, he was shot at least 4 times and is now fighting for his life.

Florida Highway Patrol Trooper Bobby Boody came home after work on Sunday night and noticed that there was no barking coming from the house. He entered to find blood and disarray, and his dog Drake lying in the bedroom bleeding.   “He was bleeding profusely and when he saw me, he attempted to stand,” said Boody, who lives alone and had to get the 100 pound dog into the car to rush him to a nearby animal hospital where he underwent emergency surgery.  Boody is clinging to hope that his pal will recover. “He’s a tough dog — that’s for sure,” Boody said. “I’m confident that he’ll recover.”

Drake was shot at least 4 times, apparently at close range according to veterinarian  Ken Simmons, who treated him.  He suffered shots to his head, hind quarters and leg, and has a long recovery ahead of him.  The 16 year old that shot him was later apprehended and claimed to have shot him out of fear, but did not appear remorseful.  His 2 accomplices are still at large.

Drake was born to be a police dog, and was trained as a drug sniffer but didn’t really take to that job so he was retired early.  “He needed a place to go, so I took him in,” said Boody, a trooper since 2001. Despite Drake’s early reputation as a difficult personality, the two hit it off well, Boody said: “He needed a strong personality.”

Despite being born with an auspicious birthdate on July 7, 2007 (7/7/7), Drake will need more than luck to overcome his mounting medical bills.  Fortunately, officers in Boody’s department are trying to raise funds to help pay for Drake’s care which will likely end up costing thousands of dollars.