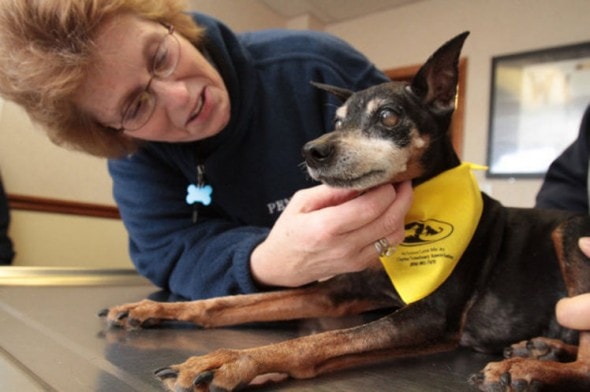 A letter carrier in Clayton, New Jersey was on his route when he stopped suddenly.  He heard a noise, and turned to at a nearby recycling bin.  Much to his surprise, a dog was inside!  It was a badly injured miniature pinscher.

The min pin had a large gash in his head, couldn’t walk, and his vision was gone.  He was carted off to Clayton Veterinary Associates, where it was determined from bruising and swelling to his neck that he had been strangled, in addition to sustaining the blunt force to his skull.

But there s hope for the little dog, who was to be named Beacon.  Just this week he took his first steps since his injury on his own.  He still has a long way to go, but hopeful technician Janelle Hall says there is still much progress possible.

“We’ve seen a huge improvement,” she said.  “He should regain about 70 percent or more of his walking ability.” 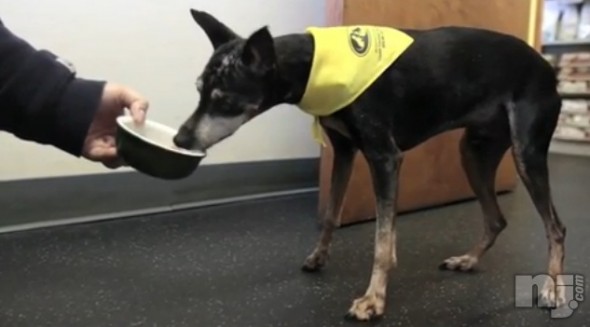 Beacon is undergoing a variety of treatments, including laser therapy, antibiotics, pain medications and acupuncture.  He will have hydrotherapy, as well as “tender love and care,” to work his leg muscles so he can walk again.

Officials are still searching for the perpetrator of the brutal crime.  They were initially informed of his being found in the bin, but were unaware that his injuries were due to abuse and attempted murder.  The New Jersey SPCA is investigating.

In the meantime, Beacon, who is between 10 and 12 years old, continues to persevere.  His sad story and remarkable fortitude have already ensnared one lucky dog-lover’s heart, and the potential new owner has applied to adopt him when he is well.