A male nursery dog called Blakley has stepped in to care for a litter of cheetah cubs, after they were orphaned due to a problematic delivery for their mother.  He may not be able to nurse them, however, he has taken over several other tasks that are just as important.

Their mother, 5-year-old cheetah Willow, wasn’t responding well to treatment after giving birth to the cubs.  After a delivery via C-section, Willow was without appetite, and very lethargic.  It was thought that despite the problems, she would make a full recovery.  That, sadly, was not the case.

“Cheetahs are a fragile species and this difficult birth proved to be too much for her to pull through. Without the C-section, we likely would have lost both the mom and the cubs,” said Thane Maynard, Director of the Cincinnati Zoo and Botanical Garden, in a press release.  “Willow was able to contribute to the survival of her species by producing five cheetah cubs.”

The cubs have been bottle fed since by staff at the zoo.  Taking care of them is a lot of work, and there are many things that need to be done for them that humans simply can’t do.  That’s when the zoo decided to employ Blakley, an Australian shepherd.  Blakley is a male, so there really no way for him to take care of feeding them.  However he does have other jobs to do.

“His first job is to let the cubs climb on him, which they did as soon as they were put together,” said zoo nursery keeper Dawn Strasser.  “They need exercise to build muscle tone and get their guts moving.” 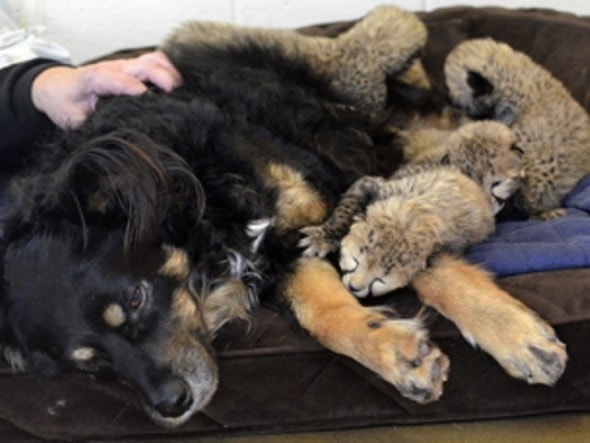 In combination with the staff, Blakley has really helped the cubs move along in their development.  They finally hit a few key milestones in their growth, and it’s all thanks to everyone’s hard work, but the extra care and love Blakley gives them is what’s really seeing them through.

“They really turned a corner this weekend.  They opened their eyes, had good appetites, and, most importantly, they pooped!” said Strasser.

A dog nannying for other animals isn’t exactly new, and this isn’t Blakley first time to the rescue.  In fact, the cubs aren’t really even Blakley’s first litter either.  In total, he’s nannied Dale, a baby takin; a cheetah cub called Savanna, a baby bat-eared fox, a warthog and an ocelot.

“In essence, Blakely is a nursery worker, helping interact and play with baby animals,” said Maynard.  “It’s cute and fun, and in terms of those babies growing up, that socialization is an important thing.”

The cubs still have a few more weeks to go before they no longer need Blakley all of the time.  For now, you can go to the Cincinnati, Ohio Zoo and check out the adorable little cubs in person, through a nursery window. 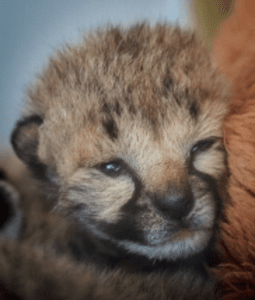