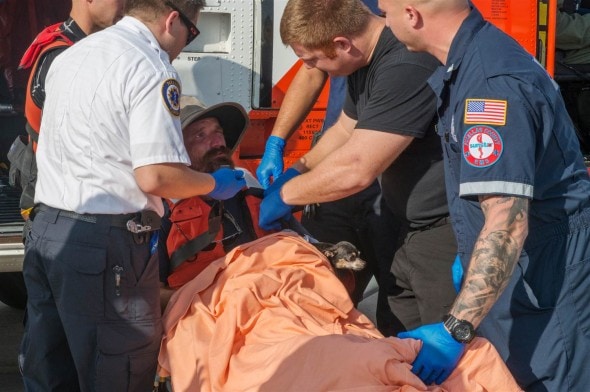 The Coast Guard was called into duty to rescue a man and dog that were stranded for days.  The 30-foot sailboat the man and dog were on caught fire on Friday, leaving the two in a very bad way.  Luckily, the brave men and women in the United States Coast Guard were able to get to them before things got worse.

The radio report that came into the Coast Guard station said an unidentified man stated his boat, the Southern Belle was disabled and adrift.  They had been out there since Wednesday, and in bad need of rescue.

He and his dog were found 69 miles off the coast of Florida, west of the city of Hudson.  He advised that there was food and water aboard the disabled boat for him and his dog.

As if being lost at sea isn’t bad enough, somehow the sailboat caught fire.  This forced the man and his dog to abandon the sailboat on a smaller lifeboat, with very limited provisions.

“There was a lot of smoke and not much left of the boat but it definitely made it easier for us to spot,” the Coast Guard’s Erick Leib told NBC News affiliate WFLA.  “He contacted the Coast Guard.  He put his life jacket and gave a good position to where we could locate him.”

Both the man and dog were rescued, and both were taken in to medical facilities.  Each were fine for the most part, but there were worries about smoke inhalation.

“Once we’ve got them in the helicopter and we know we’ve saved someone and we also did it in a safe manner, it’s a feeling of relief and a feeling of excitement,” Leib said.  “Your adrenaline is going for sure, but it’s an exciting and rewarding feeling.”