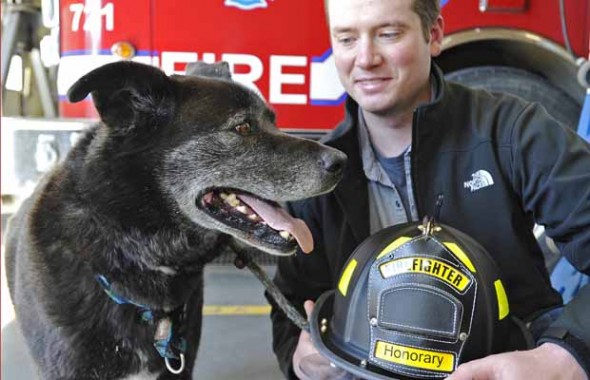 Adam Shaw and his dog Rocky became heroes on Sunday afternoon when they rescued two young girls who were drowning in the Saskatchewan River in Edmonton.

Twenty-seven-year old Shaw was hiking with his wife, two children and his dog Rocky when they heard screaming. When they looked down at the river they saw two young girls, one floating in the water while her sister tried to reach out to her. Shaw told his wife to call 911 and then with Rocky by his side he rushed to help them. “I just really didn’t want to fail,” said Shaw. “I really wanted to save them. I was just really scared. They’re screaming, and I just really felt for the girls.”

When Shaw and Rocky reached the girls the six-year-old sister had fallen into the river and was holding onto the edge of the ice. Shaw pulled her from the water and brought her safely on shore. Meanwhile the girl’s nine-year-old sister had floated downstream. “She was bobbing in and out and we could barely see her, so we just started running down the ice trying to get close to her,” said Shaw.

When Shaw tried to encourage the girl to swim closer to shore she said she couldn’t move her arms and legs. So Shaw tried to throw Rocky’s leash to her but it didn’t reach her. So Shaw moved closer to her and ended up breaking through the ice.Shaw and Rocky plunged into the water, but luckily Rocky was able to get his front paws on firm ice and Shaw pushed Rocky up to safety. Then using Rocky’s leash he pulled himself out.

The girl meanwhile had drifted further downstream, still too far to reach with Rocky’s leash. That’s when Rocky went into the river to save her.Rocky jumped in the river and swam toward the girl so she could grab onto his leash. “I called him back and he swam towards the ice and breaking the ice as he was getting closer trying to get up,” said Shaw. “I managed to grab him and grab the girl’s arm and pull them both up onto the ice.” Shaw held the hypothermic girl until the fire-rescue team arrived moments later. Both girls were rushed to a hospital where they are now in stable condition.

On Monday both Shaw and Rocky were honored for the heroic acts. They were presented with an honorary firefighter’s helmet and big bone from Fire Chief Ken Block. Shaw credits his adrenalin and Rocky for being able to save the girl’s lives. “He’s a terrific dog,” said Shaw. “He’s very adventurous, always in and out of the water. I knew he could jump in the water and swim back no problem.”