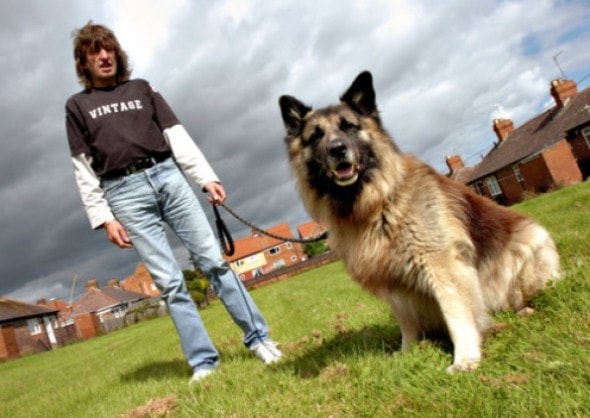 A man from England, Scott Andrews, and his German Shepherd, Sam, are in training to embark on a monster dog walk! He and Sam are planning to walk around the entire coast of England in just six months. That is a staggering 11,127 miles! The goal of the walk is to raise over $300,000 for two charities – The Children’s Society, and the PDSA, which is an animal rescue and treatment organization.

The PDSA are publicly funded, and provide free education to dog owners, as well as veterinary care for the animals of those who live off of a low income. The PDSA is a rescue organization with a no-kill policy – they never put a healthy dog down.

Scott says that he and Sam are already known in their local area for their long daily walks. Sam has been thoroughly examined by a PDSA veterinary team, and declared fit for the walk-a-thon. Scott works for a national supermarket chain, who have kindly given him a career break to allow him to complete his expedition. The supermarket chain has also been heavily involved in the fundraising.

Scott says that the pair need to walk a minimum of 20 miles per day to complete the trek in time.

“I’ve never even thought about loneliness. It doesn’t bother me, I won’t be lonely with Sam. We usually walk 10 to 15 miles a day anyway and we’ll be seeing places we’ve never seen before. Sam is my best friend, and together we can do anything. You’ve got to think of all the animals and children this walk will help in the long run,” Scott declares passionately.

Scott says the biggest hurdle he has faced is finding appropriate accommodation for him and his companion. Despite his huge charitable effort that will benefit so many people, a number of hostels have refused to let Sam stay, even though there is no legal reason a dog cannot stay in the hostels. Scott is hoping that supporters of his endeavour will help out and offer him and “cuddly teddy bear” Sam a bed for the night.