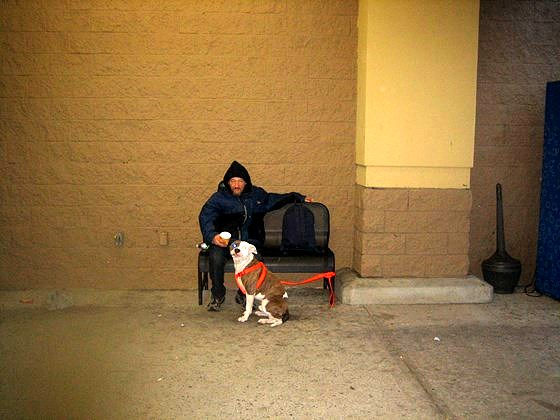 Dave Antonucci is a homeless man living by the side of some railroad tracks in Linden, New Jersey.  He cannot find a proper place to live because of his dog Petey, who is a pit bull.  Dave says Petey is his son, and he’d rather be homeless than give him up.

Dave has been out on the streets for a long time.  People remember seeing Dave pushing Petey in a cart when he was only a puppy, and he is almost two now.

“He walks the streets all day, and if nobody offers him a place, he sleeps on the side of the tracks,” says Bob Scutro, who started a fundraiser for them.  “They walk many miles a day, as can be seen by Petey’s shape and feet.” 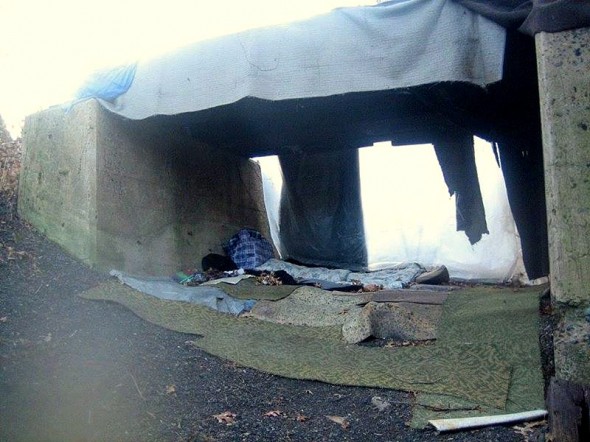 Though Dave receives Supplemental Security Income (SSI), he cannot be accepted into an assisted living program as long as Petey is with him.  The same goes for any homeless shelters in the area.  He has already lost everything else, and refuses to give up his family member.

“We’ve been together day and night, ever since I’ve gotten him,” Dave told News 12 New Jersey. “He’s like my son. You know, ‘cause I don’t have no kids in life.”

Thankfully, there are many fine people in this world who are willing to help.  Bob and other good Samaritans are collecting clothing, food, and other supplies for the pair.  One person said: 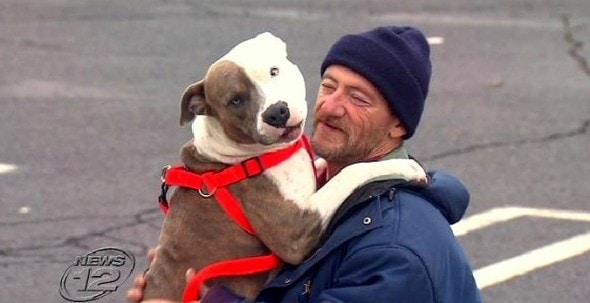 I met Dave last night at the Walmart in Linden…. I had brought over dog food, milk bones (which Petey tore through in five minutes), and an old dog bed so Petey wouldn’t have to sit on the cold ground… spoke to Dave for a good hour, then went in Walmart… got Dave some food and Petey some dog toys.

I then loaded them in my car and drove them to where he was supposed to stay last night, but no one was there.  Now on a mission… called Robert C Scutro, his original advocate, and we both started making calls.

Thanks to Maria Lynn we secured him a temporary place to stay; this picture is Petey enjoying his new toys in a warm place to stay.  Keep sharing and please donate if you can… when people come together, we can do amazing things! 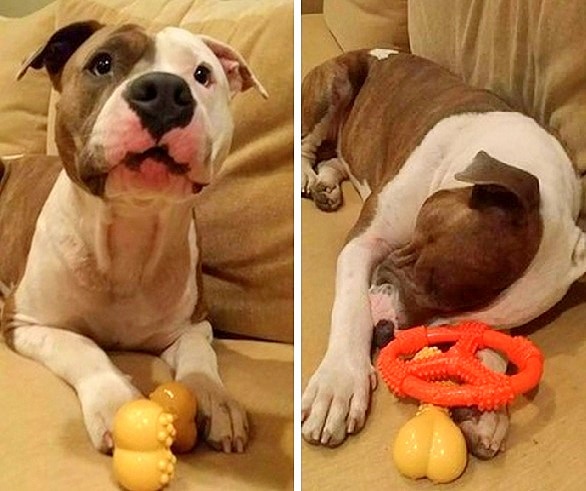 The main goal is to get them into a home where Petey can stay while Dave works, but for now, temporary housing is the first priority.  He would be more than happy to rent someone’s basement or garage.  But Bob says the fundraiser’s aim is to get Dave into a place where the rent will be covered for a year, long enough to get him back on his feet.  Bob was kind enough to bring them in for a night.

“The next morning when I walked in and saw Dave and Petey warm and sound asleep on the couch with their arms around each other, not even knowing I was there, it made me know it was the right thing.”

Dave has not asked for any of this himself.  He is more concerned about making sure that his boy – who is fairly healthy – is well cared for.  There are plans for Petey to be fully vetted on Monday. 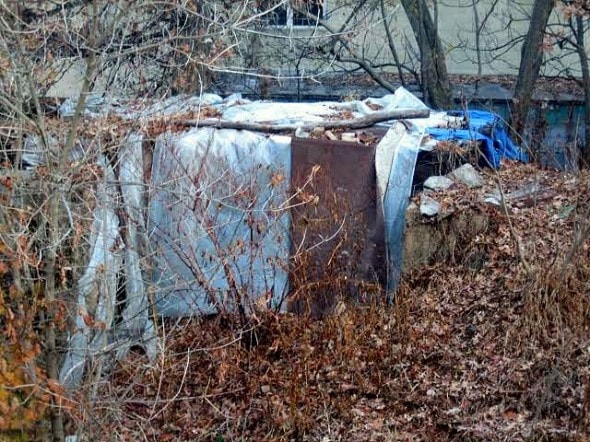 Dave has basic skills and can do yard work to earn money.  He just wants to be self-sufficient again, and is overwhelmed by all the visitors and help he and Petey are receiving.

Anyone interested in donating clothing should note that Dave wears M/L, pant size 30×30, and boot size 9.5.  He could really use some (L/XL) sweaters/hoodies, (sweat-wicking) socks, wash cloths, dog food and dog toys (ball, Kong).  If you would like to donate online, please CLICK HERE.  To donate (food) gift cards, clothing, food, etc. please call Gina Lewis at 908-230-5644, or send items to

UPDATE  12/13/14  –  After a local news broadcast, a number of friends who had fallen out of touch got in contact with Dave.  There were nearly 50 offers of places to live – from New Jersey to California – but Dave politely declined, because now, along with Petey, he is staying with one of his friends in his hometown of Rahway, NJ.  Bob – the man who started the fundraiser – is still considering what to do with all the excess donations.  He may return them, or perhaps give them to another worthy cause.