Bryon Jones from Price, Utah is one lucky man.  Not only has he survived being struck by lightning, but his dog is getting credit for drawing attention to Jones while he lie helpless, and saved his life.

Back on the 30th of August, Jones and his dog were in Garfield County in southern Utah.  They were set upon by a freak storm, and ones needed to exit the vehicle to close a gate on the property.  Jones said what happened next hit him so fast, he had no clue what had happened.

“Boom, hit me right there in the back of the head,” he said. “Felt like somebody took a backhoe bucket and just drove me into the ground with it.”

Jones had been struck by lightning.  It was just he and his dog Buddy, and even though he yelled out for help, no one came.  No one except for Buddy, that is.

Not much else is known about what happened next.  All Jones says he is 100% aware of is some time later, help arrived.  He was still lying where struck, and as far as he knows, it was just him and Buddy out there.

Jones was taken to the hopital, where the extent of his injuries came to light.  His feet, back and neck were badly scorached from the lightning, his hair was singed all over, and his clothes were shredded.

“I just cried. I cried and cried and cried,” Jones said.  “It was just so painful.  I mean, I start to tear up just talking about it because it hurt.”

Getting struck by lightning is very rare, and very, very serious.  Most people do not make it through something like that.  Especially not outdoors alone, and miles from anyone who could help.

Jones is one of the lucky ones.  He was recently released from a Utah burn center, and is recovering well.  He credits Buddy with doing something, he still doesn’t exactly know what, to get attention to his human, and get him help.

“He’s done some amazing things,” said Jones.  “I wouldn’t be surprised if he got out and wandered around the highway or something, got some attention.” 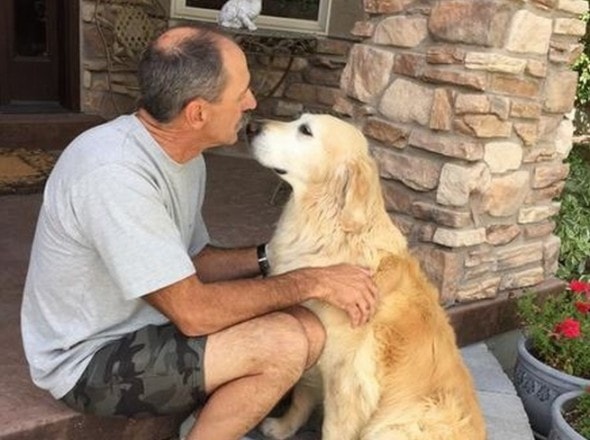