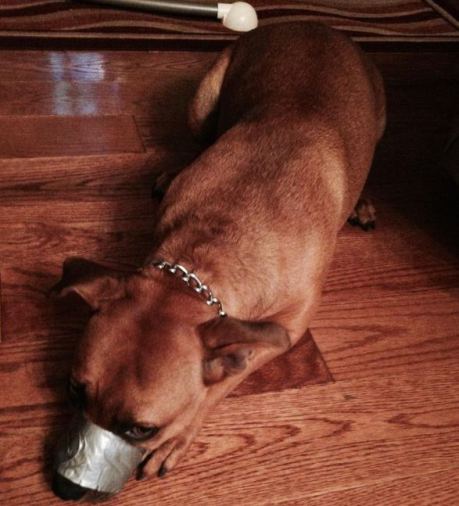 A 25-year-old woman from Salisbury, North Carolina was arrested and charged with animal abuse and cruelty after taping her dog’s mouth shut.  Photos of the dog on Facebook is what got her caught.

According to arrest records, the Rowan County Sheriff’s Office says the woman did this to stop the dog from barking.  It also says she then took photos of the dog, and posted them to her page on the popular social media site, Facebook with the caption of “Ha ha.”

Another Facebook user caught wind of the pictures, and after checking them out, reported the page to Facebook, and the local sheriff’s office.  When police reported to the scene, she advised them that she took the tape off immediately after taking the picture and posting it.

After the arrest and arraignment, Howell posted the following to her Facebook page:

“Wow!  OK.  Maybe I should of said I was joking when posting that.  But honestly though people would know better anyone who spend (sic) a week at my house would see how spoiled and loved my dog is.  Anyways guess I really didn’t think through but anyone who knows me knows when I got Leah she [was] skin and bones how (sic) that animal (was) abused (sic).”

“I have made my mistakes in life too, and believe me either I’ve paid for them or am still paying for them.  But to call me an animal abuser or child abuser, that’s so not true.”

Regardless, animal abuse is abuse, no matter what light you paint it in.  As of the writing of this article, it is not known what type of or how many sanctions Howell will be facing.