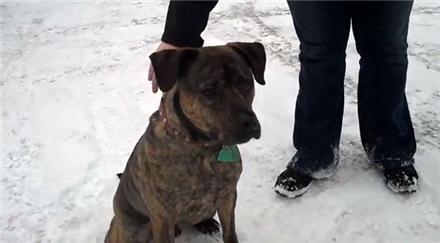 Miles, a 4-year-old Mastiff Lab mix was playing by a stream when he fell in and got swept away by the current. Trapped under the ice-covered stream with only a three- inch pocket of air to breathe he is alive today thanks to the efforts of James Goriesky.

Miles was accompanying his owner Emma Carter and her fiancé as they looked at a house they were potentially going to buy. That house belonged to James Goriesky. Miles is a playful dog who was enjoying exploring by the stream at his potential new home when he got into serious trouble. He slipped and fell into the stream and was swept away by the current and under the ice.

Goriesky acted quick and grabbed his chainsaw and started desperately trying to free the dog. “It was about 8 o’clock at night. So it was dark so you couldn’t see him. You couldn’t see under the ice,” said Goriesky. “The ice was right on top of the water so there was no room to see, but you could still hear him bark every once in a while. So I started cutting chunks out to try to get in.”

The water level of the stream was almost to the top of the ice giving Miles only a three-inch pocket of air to breathe, time was running out. After twenty minutes of trying to free the dog Goriesky was able to get to him. “Finally I was able to get to a spot where I could see where he was,” said Goriesky. “SO I went under the water and ducked under the ice, grabbed him and pulled him back to the opening. Brought him and warmed him up.”

Miles was back to his old self quickly and enjoying being a pup, much to the relief of everyone, especially his owner Carter. “Thank you to James and thank you to my fiancé, Roger, for helping getting him out because I would be lost without him.” As for Goriesky, who risked his own life to save Miles, he says he would do it again in a heartbeat.