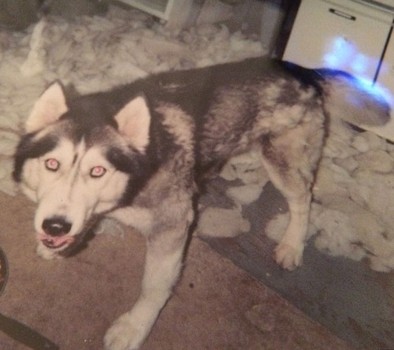 Mark Boehler isn’t sure if he has much time left and all he wants is to see his dog Thor before he dies. He is suffering from stage-3 esophageal cancer and while undergoing chemotherapy in November, Thor was stolen from Boehler’s yard.

Boehler was diagnosed with cancer in July. His cancer is inoperable and he’s not sure if he’ll be able to beat it. One thing he knows though is he’d like to see his dog one more time. Back in November Boehler was already making arrangements for a friend to take care of Thor because he knew he wouldn’t be able to anymore.

“I have a close friend who paid for his surgery in June to remove a tumor on his neck. She was supposed to take him permanently three days after Thanksgiving,” said Boehler.

On Thanksgiving that all changed when Thor was taken from his yard. Boehler found his fence cut up and Thor gone.

Pittsburgh police made progress in tracking down Thor this week when they arrested Gisele Paris, the woman they believe is responsible for stealing Thor. On January 9th, Paris took Thor to Penn Animal Hospital. The staff there immediately recognized him and began questioning Paris, who became upset and left.

Late last week authorities went to Paris’ home and questioned her about Thor. She admitted to having the dog, but told authorities Thor was undergoing surgery and refused to tell them where. When police finally arrested her on Tuesday she became combative and assaulted the arresting authorities. She is now in custody but is still not telling anyone where Thor is.