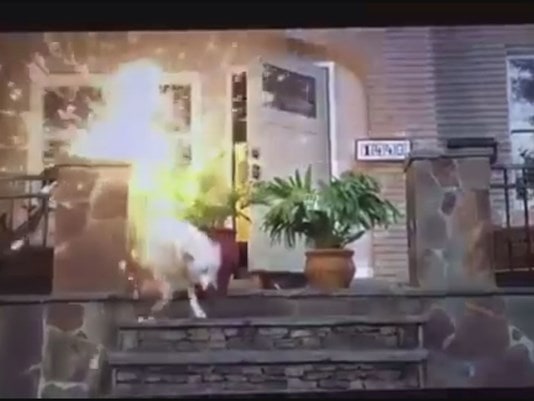 A man in Fulton County, Georgia is being hit with animal cruelty charges and faces fines, jail time, and a potential ban on ever having animals in Fulton County again.  This is all stemming from the man’s daughter catching him on video, scaring his dog half to death using fireworks.

The man in the video is identified as William Scaffidi, and he can clearly be seen intending on using the fireworks to scare his husky.  He can be seen lighting a string of fireworks of some sort behind the dog.  When they go off, the dog runs around terrified, and someone can be heard laughing.

Fulton County Animal Services said that Scaffidi’s 13-year-old daughter took the video of her father scaring the dog, and then posted it to social media outlets all over the internet.  She also “tagged” her father in the video, which is a process that lets you type the name the person in the video online, and other people that know this person can also see it.

It didn’t take very long for people seeing the video online to get in contact with law enforcement.  According to animal services officials, the calls started coming at very early Wednesday morning, and continued throughout the batter part of the day.

“The floodgates opened, every other call that has come in today has been about this,” said Tim Poorman.  Poorman is the Field Services Director at Fulton County Animal Services.  “We have had calls from all over the country, from Canada and Mexico.”

Scaffidi now faces charges of animal cruelty and failure to have a license to own a pet in Fulton County.  When confronted with the charges, Scaffidi allegedly told Poorman that he thought “the prank would be funny,” and that he didn’t think that the dog would be that scared by it.  Poorman issued the citations, but unfortunately he could not take the dog from the home.

“The dog was in good health, had all the provisions, dog house, water,” Poorman said

Scaffidi’s court date is set for the 26th of July in Fulton County Magistrate Court.  He can be fined up to $500, force Scaffidi to surrender the dog, and prevent him from ever having a pet in his possession in Fulton County ever again.  He could also spend up to six months in jail.