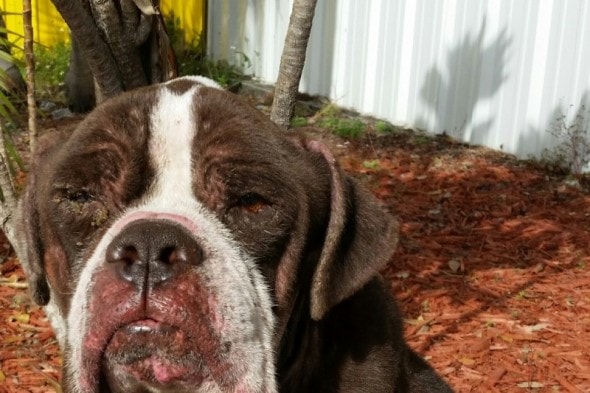 Adam Clark of the Pinellas Park, Florida area is a real hero.  When he came across an emaciated dog that had been dumped off in front of his place of business, he didn’t hesitate in getting help for the dog.  He took the dog to a local animal hospital, and spend hundreds of dollars right then and there for the dog’s care.  Now, he’s asking for your help in continuing the dog’s care, and finding him a forever home.

The male bulldog that was found, now called Andray, is estimated to be somewhere around five to seven years old, and was found by Clark in front of a business in the 3900th block of 118th Avenue N.  When Clark found Andray, the poos dog is really in bad shape.

According to the police reports, Andray had irritated skin all over his body, an eye that was crusted over with some kind of discharge, overgrown toenails and chain or collar marks around his neck.  The poor creature was freezing cold, and looked as if it had been quite a long time since he had seen a meal.

It’s believed that Andray was abandoned sometime between Sunday night and Monday morning.  When Clark came across Andray, he simply could not just walk past a dog in that state.  He called animal control officers to come and get Andray, but Clark was worried that they wouldn’t really try to help him.  He thought that Andray would simply be seen as a lost cause.

“They pretty much said that they were going to, there was no hope for him and they were just going to put him down,” Clark said.  “So, I asked him if I could take him to my vet first and see if that’s true. Because if there was nothing terminal, I wanted to do whatever we could to save him.”

Clark took Andray to the Midway Animal Hospital, where vets said that despite Andray being in really rough shape, he very well could make a full recovery.  The vets and staff at the animal hospital agreed to work with Clark to help out Andray.  Clark has already paid several hundred dollars towards Andray’s care, but he just can’t foot the bill by himself.

A GoFundMe.com page has been set up for Andray.  You can visit the site for more information, and to donate by clicking here.  If you can, please consider donating to this very worthy cause.  The police are still investigating how Andray got into the situation he is in, and are also asking for any information anyone may have on Andray.  They can be reached by phone at 727-541-0758, or you can click here to be taken to their website. 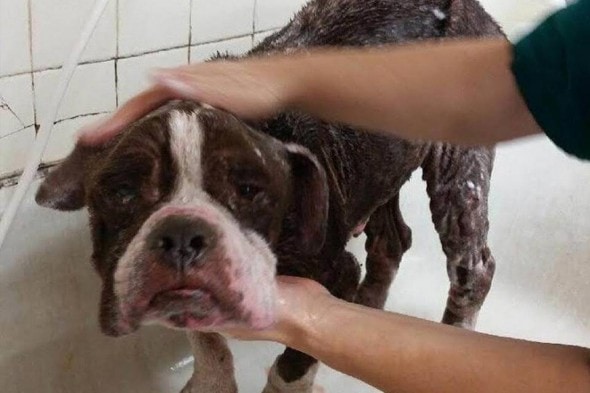