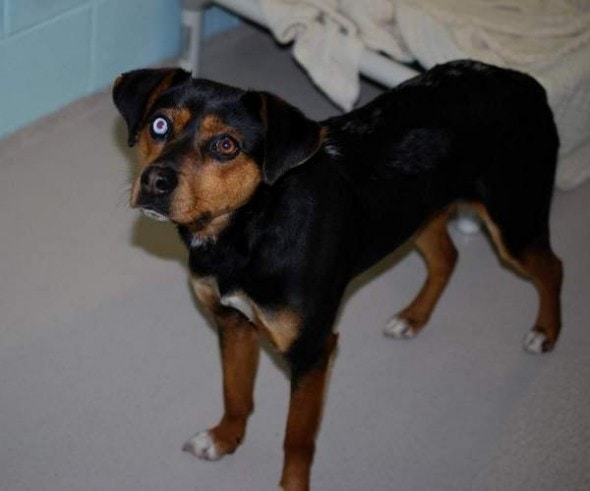 A man who wanted to surrender his dog but didn’t want to pay the $60 fee to do so, put his dog’s life at risk to get rid of him for free.  Last Wednesday the man walked into the Cumberland County Society for the Prevention of Cruelty to Animals shelter and said he wanted to leave his dog there.  He amiably went through the procedure with shelter staff, was provided with information, and asked to sign a release.  It was all going very well until the subject of the $60 fee came up. The fee covers the cost of a basic health exam, vaccinations, heartworm test, flea and tick prevention and to be offered for adoption, provided she was friendly and healthy.

The man claimed he needed to make phone call first, presumably to confirm that he was going ahead with the plan to leave the dog. He stepped outside to make the call, left the dog in the parking lot, unleashed, and drove away.  Luckily for the dog, a shelter staff member found her before she came to any harm but did not see the car that left her.  The hard part was catching her, she was scared and skittish and darted around the parking lot and out into traffic several times.

For over an over she was pursued by 6 staff members, but with no success.  They tried food, and toys, and gentle coaxing but nothing worked.  Finally another dog was brought out that was owned by one of the shelter staff.  Bev Graco, executive director of the shelter said “I went and got my own dog, Beans, out of my office (double-collared her for fear we’d have two dogs playing in the middle of Delsea Drive) and headed over to were the elusive pup was still running. By a stroke of luck, there was a fenced retention pond nearby and, after another 20 minutes, Beans was able to lure her into the fence.”.

The dog has been named “Runaway Sue” and is a young Kelpie mix; she’s about 8 to 12 months old with distinctive markings and beautiful bicolored eyes. She is described as a shy, reserved little girl who probably has suffered a lonely start to life.  She is looking for her forever home and anyone interested can get information on the Facebook page.