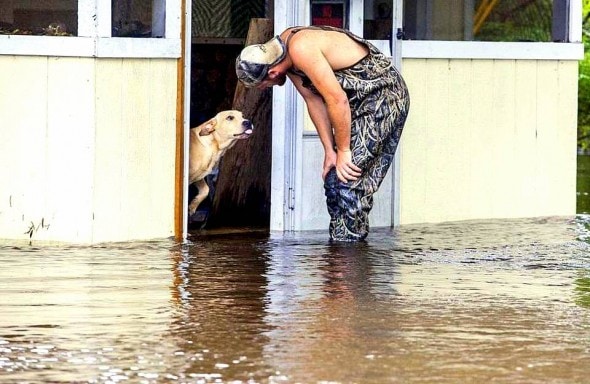 Earlier this week, Alex Scroggins was helping his family save as many of their belongings as possible from their flooded Conway, South Carolina home when he noticed a dog barking and whining on his neighbor’s porch.  After realizing that no one was coming for him, he saved the dog, and now has made him a member of his family.

Scroggins had been helping his mom and sister load their things onto a jon boat when he spotted the yellow Lab on the porch.  He assumed that his neighbor was around and would be coming to collect the dog soon.  But after making several trips, and with floodwaters continuing to rise, it became sadly apparent that no one was going to save him.

“I asked some neighbors and they said the owner had left the dog there a few days earlier,” he told The Dodo.

He knew that if he didn’t save the dog, he very likely would have drowned.

“I approached him, and he was skittish at first, since his owner had left him high and dry. After I put my hand out and let him get used to me, he calmed down and I pet him. We scooped him up and took him to safety on the boat,” Scroggins explained.  “He was almost without a dry place to stand by the time I found him. That dog was going to be swept out. It would have been only a matter of time before we saw him floating in the river dead.”

The hero tried to find a no-kill shelter to take the unwanted dog in, but as it turns out, fate had another plan.

“All the shelters around here were completely full, so I decided to bring him home with me for the night.  I cleaned him up and fed him. He was so happy to be safe.”

The following day, Scroggins found out that the man who dumped the dog, since named Lucky, didn’t care to have him back.  This has caused many to wonder why he bothered getting a dog in at all, especially since this is not the first time one of his pets has needed to be rescued.

“The owner who left the dog knows I have him, but he doesn’t care. He didn’t even ask about him,” Scroggins said.  “He had another dog before that needed to be rescued by the Humane Society because he left him tied to a tree outside without food. I don’t think he cared if Lucky would die out there. He had time to come get him, but he didn’t. Who would do that? I’d get my dog before I got anything else.”

Scroggins had no plans to get a dog, but now says that Lucky is welcome to live with him.  However, it doesn’t seem that he has much of a say in the matter.

“I feel like he understands what happened, ’cause now he refuses to leave my side.  It makes me feel better knowing the dog is in a better place than he was. If you see someone in need of help and you can do something, then do something — that goes for people and animals. If you can help out, try. That’s what I hope people take away from this.”