Thousands of outraged people watched a video of a dog being heartlessly abandoned on a Brazilian roadside, but only one man acted on it.   The man spent two days searching the area, and once he found him, he brought him home to his family for keeps.

A bicyclist captured film of the dog trotting along after the truck, not understanding that the driver wasn’t coming back for him.  The woman returned in a car, but by the time she made it back, the dog had vanished. 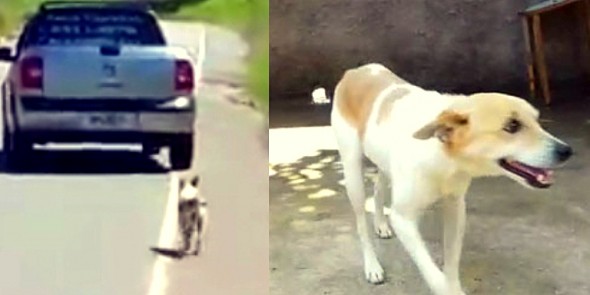 She notified police, and posted the footage online.  The video soon went viral, and one man was angered and saddened enough to do something about it.  He went searching, and after two days, found him.

“So people, this here is the dog we rescued who created so much controversy here in Itabira. Moved by the story, we decided to go after him. Now he’s being taken care of at home, with food and everything he needs.”