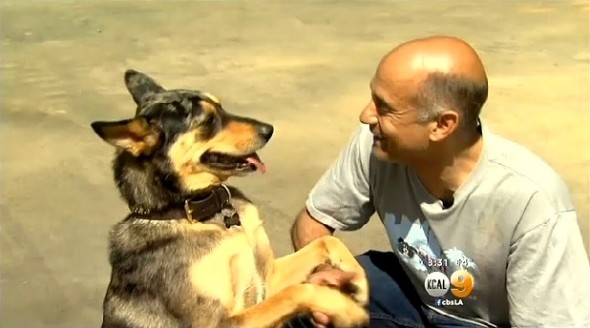 A birthday wish came true for a man in Mid-Wilshire, Los Angeles when he was reunited with his dog, who was stolen along with his car on Friday night.

Scott Katz was at a jazz concert on Friday, and while off enjoying the music his vehicle was stolen.  To make matters worse, his rescued cattle dog Max had been in the car at the time, so he was stolen as well.

Katz went around town, putting up flyers and posting Max’s picture on various social media sites.  There was also a $500 reward offered.

Lucky for Max and Katz, strangers found the car and the dog in it in a parking lot near a dog adoption expo on Sunday.  One of them recognized him from the flyer she had.

“They said, ‘I think your car’s here and dog’s here, he looks fine,’” Katz said. “Today’s my birthday, so it just worked out perfectly.”

Max was found not far from where he and the car were taken – in the La Brea Tar Pits parking lot, only about 500 feet away.  The car was broken into and Max was freed.  He appeared to be completely unharmed, and was given water by a security guard who thought Max’s owner was coming back shortly.

It is Katz’s belief that his efforts on social media to publicize the theft of the car and dog is what truly helped Max get back to his loving home.

“Maybe the pressure of everyone knowing about it,” Katz said. “It’s pretty amazing, he’s doing fine.”

13 thoughts on “Man Reunited with Stolen Dog on His Birthday”