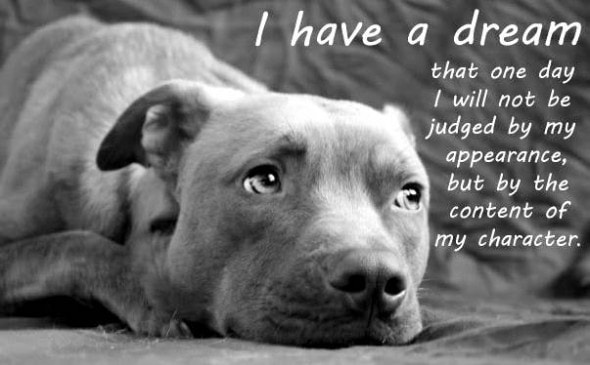 Dr. Ken Tudor shares information that we dog lovers have known for a long time:  when it comes to dog attacks and problem behavior, it’s NOT the dog – it IS the human.  A 10-year correlational study showed that breed specific legislation doesn’t work, because breed doesn’t determine aggression – how dogs are treated does.

At petMD, we’ve has had some long and spirited discussions about dog breeds and human attacks by dogs. Many contributors to the discussion rightly pointed out the lack of reliable data surrounding this issue. Yet the political answer to the situation is always breed specific legislation (BSL). In other words, ban the ownership or restrict the activity of specific breeds alleged to be involved in human attacks. Municipalities persist with this narrow focus despite studies that indicate the ineffectiveness of these programs.

The results of a 10-year study recently reported in the Journal of the American Veterinary Medical Association sheds further light on the complexity of this issue. It identifies preventable factors that are far more significant than breed.

The researchers examined the data from 256 dog bite-related fatalities in the U.S. between the years 2000-2009. They generated the following statistics for factors involved in the fatal attacks:

These statistics indicate that most of the factors surrounding dog-bite related fatalities are preventable and unrelated to dog breed.

The first statistic shows the obvious lack of supervision in these attacks. Responsible dog and victim parental or caretaker supervision most certainly could have prevented the majority of these deaths.

73% of the dogs were chained or isolated in fenced outdoor areas or indoor areas. Only 15% of the dogs were allowed to roam. Nearly three-quarters of the attacks occurred on the dog owner’s property. Restricting access to these areas could prevent many attacks.

Interestingly, 67% of the older victims that were deemed compromised were under the influence of drugs or alcohol, another preventable circumstance. Only five of the victims were compromised due to Alzheimer’s, dementia, or uncontrollable seizure disorders.

The reporting errors in this study are also disturbing. Fatal dog attacks are always media sensations and heavily reported. Yet we can only trust that 60% of the reports of breed identification from the media and involved animal control officials are accurate. And unfortunately, it is media reports rather than fact that spur the political decisions that lead to breed specific legislation. Based on this study, 20 breeds and 2 mixed breeds should face legislation rather than the few that are presently targeted.

The ugly truth about this study is that it points to human behavior as the cause of dog attacks on humans. Social responsibility cannot be legislated. Many of these dog owners had histories of animal mismanagement, yet the penalties or consequences were inadequate to change the behavior. It would have been interesting if the study had also looked at previous behaviors and histories of the parents of the young victims.

Whether programs for responsible pet ownership, bite prevention education, or dog related parent supervision education are widely effective has yet to be proven. Certainly breed specific legislation is not the answer. A recent Canadian study showed that there were no significant differences in the number of bite related hospital visits before and after communities adopted breed specific legislation.