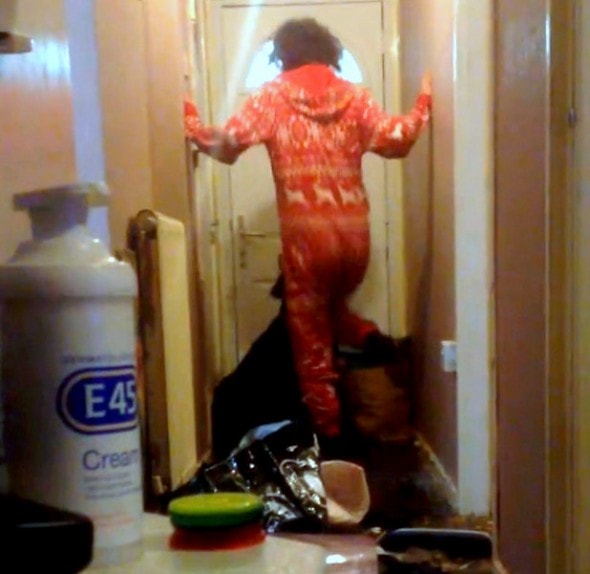 A UK man was thrown out of his home when he confronted his pregnant landlady for hitting her Rottweiler with a shoe and kicking him numerous times.  When he posted the video online and reported the crime to police, he was told there was nothing they could do because “it’s only a dog.”  Thankfully, the dog has now been removed from this house of horror.

Carl Gough says the attack began in the kitchen of his Manchester apartment when the woman beat her four-year-old dog with a shoe.  She then chased Lennox down a hallway and kicked him.

“I have been out with some friends and came home. I opened the door and went to the kitchen and she must have not seen me or something,” the bartender explained.

“I saw her beating the dog. It was horrific to watch. I asked her what she was doing and she said she was punishing it because it wouldn’t sit down.

“She then started kicking it in the hallway. Afterwards she kicked off me with when I confronted her and threw me out.

“She said there wasn’t a problem with it and that her partner also beats up the dog. I’m scared for its safety. It needs to be removed.

“I’d only been living there for two weeks and she’s kicked me out now.  I’ve got nowhere to go so I’m going to end up sleeping on the streets.”

Gough had only been living in the two-bedroom apartment for a couple of weeks, and thankfully he was there to film the brutal incident.  He posted the video online, and contacted the RSPCA and called police.

“The police turned around to me and said they can’t do anything because it’s only a dog. They said if I don’t pull the videos down I can get done for harassment.

“I was absolutely disgusted. I haven’t done anything wrong yet the police are telling me I’ll get arrested and doing nothing about her.”

After numerous posts were made on the RSPCA’s Facebook page, they told concerned folks:

“This dog is now in our care and we are investigating. A date has been set to interview the person in the video but, as our investigation is ongoing, I’m afraid we can’t give any more information at this time.”

Hopefully the investigation will ensure that Lennox is not returned to his home and that this heartless woman charged with abuse, which most certainly is against the law in Manchester and all parts of the UK.  Click here if you’d like to visit the Greater Manchester Police’s Facebook page and give them a piece of your mind.

It is also hoped that this woman’s abusive behavior is addressed with the help of a therapist before she gives birth and treats her child similarly.

Watch the video at your own discretion.