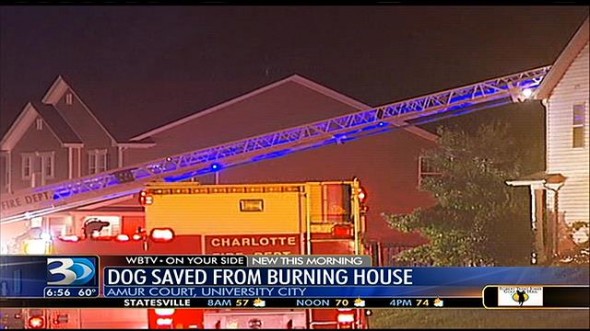 A dog’s life has been saved thanks to a heroic neighbor.

The fire in a Charlotte, NC home began in the attic around 11:30 pm on Tuesday. The husband and wife living there escaped with one of their dogs, but the other was trapped somewhere inside.

Neighbor Alex Falivene couldn’t stand to think that a scared dog would be tragically dying right before his eyes. Though thick smoke was pouring from the house, Alex rushed inside.

He found the dog in one of the front rooms, and managed to get both the dog and himself outside, but not unscathed.

“I just grabbed the dog and got out of there.” he said. “It bit me a couple of times on my arm and on my hand a little bit…nothing bad.”

Firefighters were able to save the house, but the family will have to stay elsewhere until it is repaired.

It is believed that carelessly discarded smoking materials outside of the house were the cause of the fire.