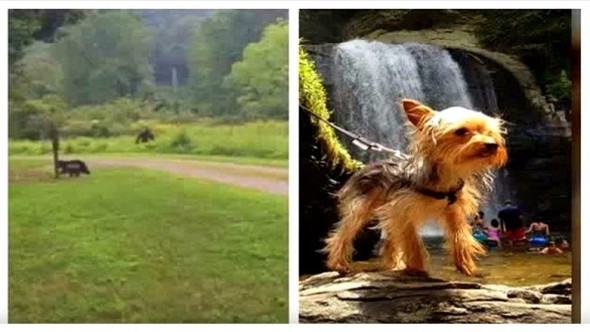 Here’s one for your personal News of the Weird stash:  a North Carolina man says he was capturing video evidence of a Sasquatch, but his Yorkie sensed his fear and chased the creature away.

Eric Walters of Boone, NC was staying in a cabin in the Blue Ridge Mountains when he came across the legendary man-beast.  At first he thought it was a bear, and rather than move to a safer area, he decided to film it.

“Our neighbors told us there was some bear activity and to be cautious,” Walters told WBTV. “So, when walked the trails I’ve kept my Yorkie, Zippy very close.”

“I quickly realized it was not a bear, but a Sasquatch,” Walters said. “Zippy could tell I was scared and got so riled up that he got loose and went after it.”

But before he could capture too much footage, Zippy began barking and the creature hastily departed.

A big guy like Sasquatch?  Scared of a Yorkie?  They’re only scary if they get underfoot when you’re near the top of a flight of stairs.
.

.
“[He] saved me from a possible encounter,” Walters said. “I love him more than ever.”

It’s easy to laugh at the guy, but hey, new species are discovered all the time.  Though Walters panics and botches the film job at the end, the few seconds he does record of the mysterious being (which is clearly not a bear) certainly leave room for interpretation.

“I’ve read that some people think I was a little over dramatic, but how would you react to a Sasquatch?”

Fair point.  It seems that of the three in that situation, Zippy was the most fierce.

“Yorkies are small in size, but bigger than even a Sasquatch in heart.”

What do you think?

60 thoughts on “Man Says His Yorkie Scared Off Bigfoot”