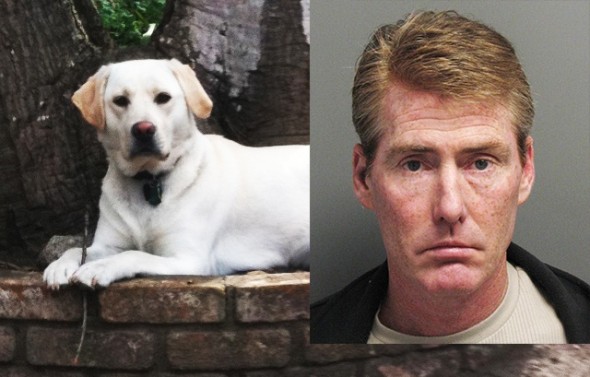 A Monterey, California man has been sentenced to a stint behind bars and some probation after pleading guilty to stealing a family’s dog, and releasing it into an area, in which it was never found.

The Monterey County Deputy District Attorney Gary Thelander’s office says Gregory Perkins, 45, has been sentenced to 180 days in jail, and three years of felony probation, as well as anger management, and psychological counseling

Prosecutors allege Perkins took his neighbor’s dog, Candy Cane, on the 24th of August 2012, right from their front yard.  He then took Candy Cane to Carmel Highlands, a wooded area south of Monterey, and released the dog into the woods.

After a week of being missing, Candy Cane was found by someone whom returned the dog to it’s family.

Then, in the 21st of July, 2013, while the family was on vacation in Disneyland, Perkins came into their yard, and took the dog again.  This time, he had been seen by other neighbors, who reported Perkins to the police.

When questioned by officers, Perkins did admit to that he took the dog both times, and both times releasing the dog in the Carmel Highlands area.  Perkins had complained to officials while in custody that the dog had been barking uncontrollably, but had never reported the barking to authorities or animal control.

After months of searching, Candy Cane has still not been found.  Friends, family, animal rights groups, and media sources have all helped look for Candy Cane, but, nothing yet.

Perkins in the meantime, has plead guilty to felony animal abuse, and misdemeanor grand theft.