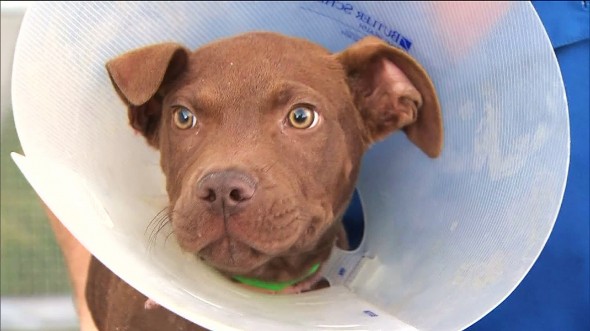 A Los Angeles man will spend 16 months in state prison after he was caught dragging a puppy down a street when it refused to walk. Even as the puppy began to bleed the man continued to drag him.

On January 3rd Dossey James was spotted by witnesses dragging his 4-month-old pit bull puppy down the street when the puppy wouldn’t walk. James didn’t stop dragging the puppy even when it began to bleed and at one point witnesses saw James throw the puppy on the ground. Witnesses recorded the horrible acts with their cellphone cameras and contacted police.

James was arrested and charged with two counts of animal cruelty. He pled no contest to felony animal abuse and was sentenced to 16 months in jail. He is also barred from owning or having contact with any animals for 10 years.

The puppy was taken to the South Los Angeles Animal Shelter where he was treated for his injuries. He had to undergo surgery for the lacerations he suffered from the dragging. He is expected to make a full recovery.

7 thoughts on “Man Sentenced to Prison for Dragging Puppy”