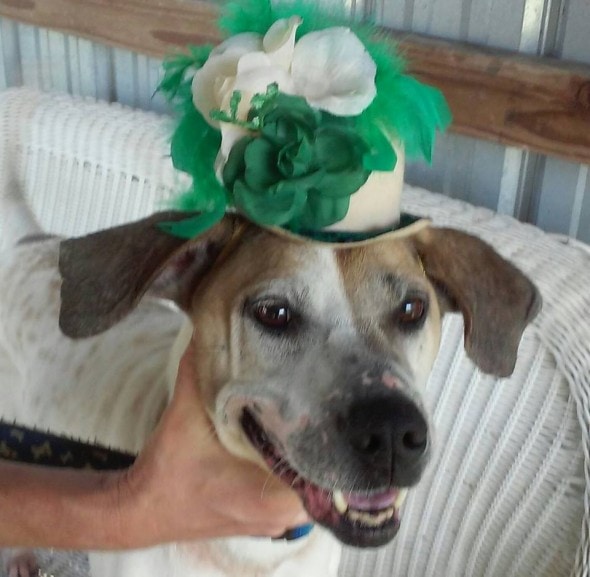 Meet Darby, an eight-year-old Brittany-hound mix.  She’s currently with Collier County Domestic Animal Services (DAS) in Naples, Florida, and has been since her humans had to give her up last December.  They just couldn’t provide for her anymore, and made the decision to give her a better chance at a better life.

“There are many reasons why dogs are surrendered, but Darby’s was particularly heartbreaking,” said Mary Jones, a volunteer at DAS, in an interview with The Dodo.  “Darby’s owner fell upon financial hardships.  He lost his home, and was living out of his car for a couple months, Darby all the while at his side.”

It wasn’t an easy decision to make, but it was decided that Darby deserved better, and it was the least they could do for her.  Now, the search is one for a forever home for her.

“Reluctantly, he realized this was no life for her, and he knew he had to give her up,” Jones said.  “When he brought Darby to the shelter, he was in tears.  He had the entire DAS staff in tears too.”

Like so many other dogs that face this situation, there was a time where Darby was very down.  A new place, new humans and most definitely all manner of new smells and animals about is enough to drive anyone around the bend.  However, she eventually came out of her shell.

“In fact, I think she feels as though she is the Grand Dame since she is the oldest dog there,” Jones said. “She barks at many dogs as she makes her way to the yard.  She is a free spirit.”

Now Darby needs a forever family.  Could she be the dog for you?  If you’d like to check out more about Darby, you can go to The Dodo, or click here to be taken to more.  You can also contact the Collier County Domestic Animal Services on Facebook or at 239-252-PETS.