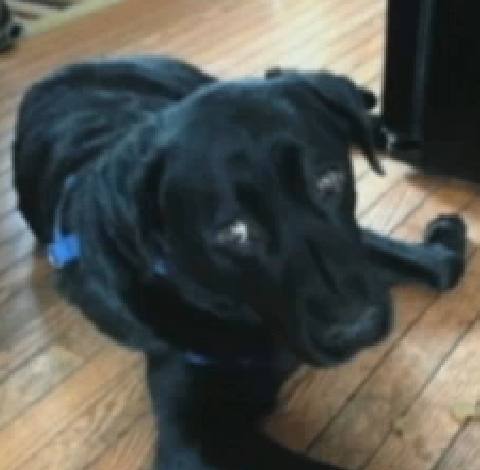 A deadly multiple car pileup in Indiana on Thursday killed the owner of a black lab named Sparkie. Then another victim of the crash that was uninjured came to Sparkie’s aid and is now trying to find him a good home.

Bob Sharpe was driving on I-94 near Michigan City, Indiana when a sudden white out caused a major accident involving 46 vehicles.

“The accident scene was massive carnage,” said Sharpe. “I was the lucky one. I came to a stop behind a bunch of vehicles that were crashing in front of me, vehicles were passing me and crashing behind me and I didn’t get touched.”

Once the chain reaction was over Sharpe tried to help the injured motorists around him. While he was helping a mother and child keep warm in his truck someone walked up with a black lab. Sparkie had survived the crash, but his owner wasn’t as lucky.

Sharpe took Sparkie and has been caring for the dog ever since. He is now trying to find Sparkie a good home.

“I have been in contact with the family and they know I have the dog,” said Sharpe. “Their lawyer contacted me and asked if I could get the dog adopted, that basically they didn’t want the dog to come back. I think it was just too traumatic to have the dog back.”

Sharpe has already received lots of interest from people wanting to adopt Sparkie, now it is just a matter of choosing the right family for him.