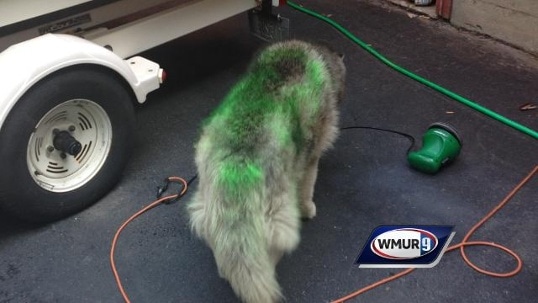 Jay Filter is Balto’s human dad, and is trying to track down the person or people responsible for spray-painting him when Balto decided to take a wander about the neighborhood.

This has happened to Balto not once, but twice now, and Filter is tired of it.  Sometimes Balto escapes the backyard of his home in Weare, New Hampshire.

Even Balto’s neighbors are coming to his side in the matter.  Christine Lover said she has never seen Balto do anything bad.

“He doesn’t do anything destructive to anybody or anybody’s property,” said Lover.  “My three dogs will run out there and just go after him, and he just sits there calm as a cucumber.”

Apparently, Balto has found someone that is definitely not a dog lover.  This first happened to him last spring.  He came home with a pink tail, and later returned again with more paint on him.  This time with a green streak up his back. 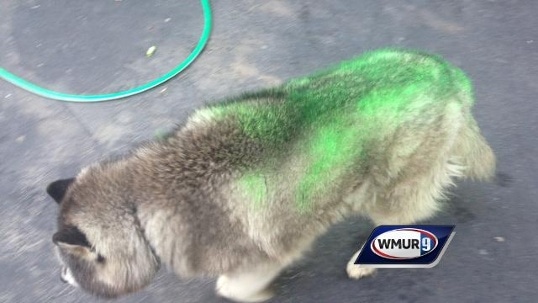 At first, Filter didn’t contact authorities.  However, now that this has happened again, Filter has had enough, and is out to find out who is doing this to Balto.  He has contacted authorities, and is actively searching for answers.  He knows that there is a leash law in Weare, and understands that he and Balto are sometimes in violation of it.

“I just don’t want anybody doing it to the dog anymore,” Filter said.  “If they have a problem with me or my dog being loose, call the authorities, call me, call animal patrol.  It’s not something you do to a poor dog.”

Police advise that if the person doing this to Balto is caught, they may face animal cruelty charges.

“Huskies have three coats of fur on them, and that helps them out with their body temperature, so if you start coating that with something it becomes a problem,” said Filter.  “If it was in the summer, it probably seriously would be a problem.”

Police are asking anyone with information to please come forward. 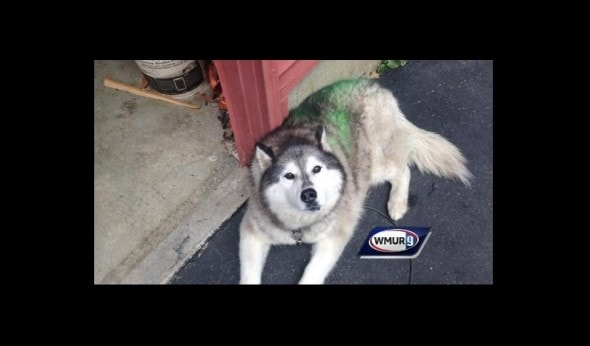