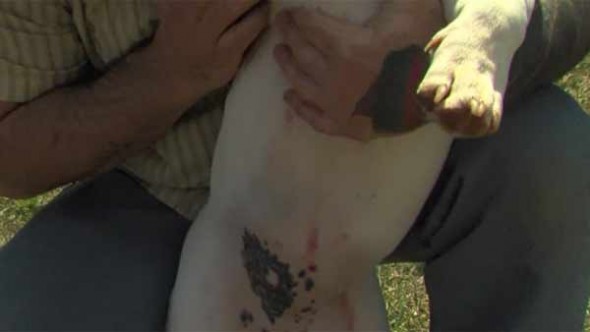 A North Carolina man is under investigation after he gave his four-month-old pit bull a tattoo.

Ernesto Rodriguez says he loves his dog like they were his children. After posting a photo on Facebook of a tattoo he gave his puppy, Duchess, people are questioning that. Rodriguez gave the puppy an intricate tattoo for identification purposes he says. His other dog Duke has one too. “They both have it. Thy both have their tattoos on them just in case anything happens,” said Rodriguez.

Rodriguez says he gave Duchess that tattoo after taking her to the vet to get her ears clipped and he insists that Duchess was asleep for the whole procedure. “I took her to the shop, tattooed her, and she slept the rest of the day,” he said. Animal advocates, like Caleb Scott, don’t think Rodriguez’s story makes sense. “Really that’s kind of suspicious in my mind,” said Scott. “Usually when you pick up a dog or cats they’re already awake after the procedure. They don’t usually hand you over a dog that is asleep.” Scott also thinks Rodriguez’s story has changed. “On his first Facebook post he said he was bored and tattooing. I think now he’s backpedaling, saying he’s identifying it.”

When Rodriguez was asked if he regretted his decision he responded, “No, not at all. I’ll do it again to my next dogs.” Rodriguez stands firm in his decision to tattoo Duchess despite the backlash he’s received from people all over the country. “It’s just like judging someone for wearing a tattoo,” he said. “You judge and you think that they’re bad people. It’s not. It’s just art. I’m an artist, I want to put art on my dogs. She was already asleep, so I took advantage of that.”

Local authorities are investigating after someone filed a complaint. No charges have been filed yet.

30 thoughts on “Man Under Investigation After Tattooing His Puppy”