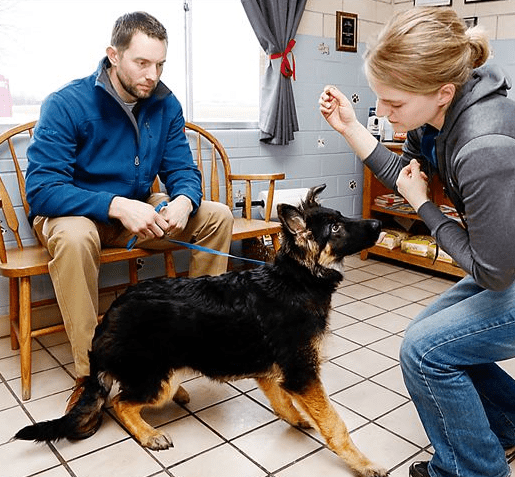 A young German Shepherd puppy was going to be put down after sending his owner to the hospital with several bite wounds, but then veterinarian Dr. Ryan Zimmerman gave the puppy a lifesaving second chance.

Barb and Phil Kerbel surrendered their German Shepherd puppy Kane after he bit Barb several times sending her to the hospital. Barb tried to put Kane outside when a cat ran through the kitchen triggering an attack which led to injuries on the woman’s hands, leg and wrist. “Our normal procedure in a situation like this is to euthanize the dog and send it to be tested for rabies,” said Sandusky County Dog Warden John Glass. Kane was spared when Dr. Zimmerman stepped in and said he wanted to try to work with the puppy.

Glass contacted the Kerbels who signed off on the request to not euthanize the puppy. Dr. Zimmerman has worked with lots of pets with behavioral issues and says sometimes a dog just needs socialization. Many trainers agree that especially early in a puppy’s life socialization is critical. The puppy’s attack on his previous owner is alarming. “For a 17-week-old puppy to do that much damage, it’s really concerning,” said John Brown, a behavior technician at the Lucas County Dog Warden’s Office.

Zimmerman plans to work with the puppy to figure out if there are things that set him off. In the first 24 hours he spent with Zimmerman he has not reacted to a cat that walks around the clinic. “He shows normal curiosity toward the cat,” said Zimmerman. “He’ll sit for treats. “We’re not trying to push him; we want to ease into it. But so far, there’s not a lot of indications that this is a dog that’s dangerous from his behavior.” “We won’t adopt him out unless we are absolutely sure there’s no more risk with him,” said Dr. Zimmerman.