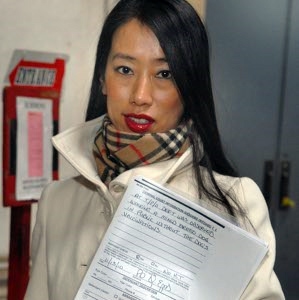 A Manhattan woman is headed to court to fight frivolous charges leveled against her thanks to a hard nosed hearing officer who refused to acknowledge critical evidence in her case.

The uncooperative court official refused to toss out the “failure to vaccinate” tickets issued to a Manhattan dog owner Jin Won, refusing to allow the receipts, vet records and dog tags that prove her dogs have current vaccinations.

“I’m stunned,” said Jin Won, who’d been ticketed while walking her dogs along East 99th St., on Nov. 20. She was stopped by two police who questioned the fact that all four of her dogs wore rabies tags dated 2009. When Won tried to explain that vaccinations were good for three years, the officers turned a deaf ear and issued her a ticket for a health code violation.

Won was upset, but assumed that the legal system would protect her. “I thought I’d show the judge these papers today, and he would toss the tickets,” Won said after her appearance before Hearing Officer Richard Ross. Won told Ross that she had brought supporting paperwork, including a $400 vet bill to prove that all four of her dogs were current in their vaccinations.

Ross pronounced the matter “a trial issue,” refusing to look at any of her paperwork.

Now the matter will have to be tried in Manhattan Criminal Court in February, costing Won and tax payers money. “Now, I’m going to fight this,” she said, after Ross offered her the choice of paying a $100 fine — $25 per dog — or pleading not guilty and going to trial.

Court veterans are baffled. “This would normally be dismissed,” said defense lawyer Dru Carey. “Especially with proof that she had done what the law asked her to a year and a half ago, and that the dogs were never the rabies threat that the law protects against.”

Won has indicated that she has no plans to back down. “I’ll go to trial if I have to,” she said. “This isn’t fair. This is ridiculous.”