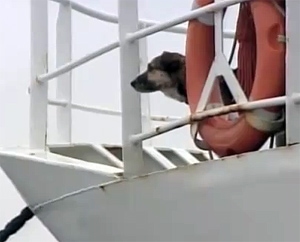 A year after he was rescued from an ice floe off Poland’s coast, Baltic the dog is headed back out to sea. Baltic was saved after a journey that saw him floating on an ice sheet down the Vistula River, then 15 miles out to sea. His rescue gained worldwide attention.

Adam Buczynski, the dog’s rescuer and now his master, said Baltic is a faithful companion to him. “He even accompanies me to the bar for beers,” he said.

The brave little dog may be off the ice for good, but these days he can be found on the Baltic Sea aboard the Baltica, a research ship.

Officials from the port city of Gdynia visited Baltic Tuesday, bringing him new feeding bowls and celebrating his rescue’s anniversary.

2 thoughts on “Rescued Dog Ventures Back Out to Sea”