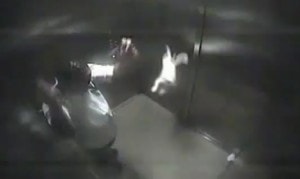 A man abusing a dog in a housing-project elevator in Harlem was caught on videotape, police said.

The abuser, identified as Carlos Baez, is seen violently jerking the leash of the dog: a 10-pound, spotted male dog named Dutch – before kicking him and slamming him into a wall in the lobby of the Grant Houses at Amsterdam Avenue and West 127th Street.

It is the second time this year that an incident of animal abuse was captured on camera at the Grant Houses.

Baez, 29, was arrested October 2 and charged with animal torture and marijuana possession. The announcement of the arrest was delayed until Wednesday because the police’s public information office just recently received the videotape.

A veterinarian at the Center for Animal Care and Control said that Dutch is not injured, and has been returned to his owner, who (fortunately) is not Mr. Baez.

10 thoughts on “Manhattan Man Arrested for Abusing Dog on Camera”