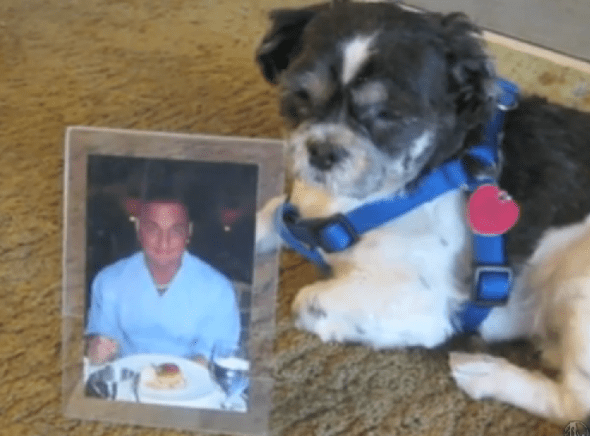 Hours before Gary Mazza passed away from cancer he asked his parents to take care of his dog Max. His parents couldn’t bear to tell him that Max had been stolen from their home. Now almost three years later they are finally able to fulfill their promise to their dying son.

A few days after former police officer Gary Mazza checked into the hospital his beloved Shih Tzu Max vanished from his parents’ home.  Gary was battling colon cancer, and on February 22nd, 2010 at the age of 42 he lost that battle. Hours before he passed he asked his parents to please take good care of Max for him. “I told him we would,” said Marie Mazza. “My heart was heavy. I felt bad because I knew I was lying.”

As time passed the Mazza’s never gave up on their promise to their son. They never removed Max’s toys from their home. Max was micro-chipped and the Mazza’s put out the word to anyone they could about their son’s missing dog.

The Mazza’s had a feeling their son’s dog had been stolen and that suspicion was confirmed when they received a phone call on December 22nd. The phone call came from a man who told the Mazzas, “I have your dog and I’m not giving it back.” He told the Mazzas he had seen Max outside their home and picked him up. The Mazzas begged for Max’s return, but the man refused.

Arthur Mazza used caller ID to find the name and address of the man who had telephoned. Arthur and some of Gary’s friends staked out the man’s place to confirm that they had the right man. Once they were sure they went to the police.

Stephen Marete was arrested on December 30th and charged with possession of stolen property. Max is now safe and home with Arthur and Marie. “I feel better now,” said Marie. “I’m able to do what I promised.”