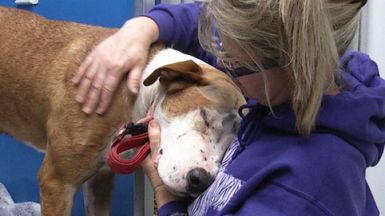 It is unthinkable, yet it happened.  A dog was shot in the head and face multiple times by a pellet gun, then put in a garbage bag and left to die.  If not for good Samaritan and animal rescuer Tami Augustyn, who found him on Saturday morning Buck would not have lived.  Augustyn, who lives in Conroe, Texas was alerted to the situation by neighbours and immediately went to help.

When she opened the bag, the 3 year old mix breed who has been named Buck, came out of the bag, took a few steps, and collapsed.  She took him to the Animal Emergency Clinic in Conroe where he was examined and stabilized.  He has multiple birdshot pellet fragments in his face, shoulders, neck, both eyes, and inside of his mouth, and has not walked since arriving at the clinic, however there are reports that he has been moving around in his kennel a little.

It is not yet known whether he is permanently blind, but he will be transferred to a specialist hospital this week for further treatment and when he is more stable they will consider taking out the pellets.  Such a crime is hard to fathom and an investigation is under way to determine who could have done this to poor, defenceless Buck.

Donations are being accepted for the cost of Buck’s precious care and donations can be made directly to Animal Emergency Clinic located at 920 West Dallas, Conroe, Texas. Donors can call (936)-539-3800 at anytime.  There is also a Facebook page called Buck Needs Bucks for his Buckshot Injuries where you can follow his progress.

If anyone has any information about Buck, please call Crime Stopper at 1-800-392-STOP. Be the voice for those who cannot speak. Please speak out for Buck and all other victims of these heinous crimes.