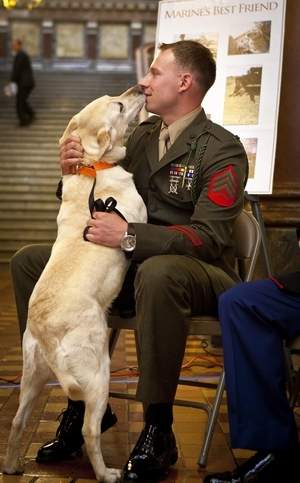 Marine Sgt. Ross Gundlach developed a special bond with his bomb-sniffing partner Casey while deployed in Afghanistan. A bond so strong that Gundlach made a promise to do whatever it took to find her if they both made it out of Afghanistan alive. That promise was fulfilled when Gundlach and Casey were reunited almost a year since they’d last seen each other.

Gundlach and Casey faced more than 150 missions together while deployed in Afghanistan. Casey, a bomb-sniffing Labrador retriever, would search for improvised explosive devices with Gundlach by her side. They became much more than just partners though, and Gundlach knew he wanted Casey to be part of his life even after they finished their deployment.

“About midway through, I told her if we made it out alive I’d do whatever it took to find her,” said Gundlach. “I owe her. I want to take care of her…I’ll just try to give her the best life she can have from here on out.”

Gundlach kept his word. The two were separated on June 3, 2012. Casey went to serve in the Iowa State Fire Marshal’s Office and Gundlach went on to school at the University of Wisconsin. When Gundlach finally tracked Casey down he wrote to the Iowa State Fire Marshal’s Office explaining his special bond with Casey. For two months he kept sending pictures and demonstrating his desire to get Casey back.

State Fire Marshal Director Reynolds knew he wanted to reunite the two. Reynolds contacted the Iowa Elks Association and they agreed to donate $8,500 so the agency could replace Casey and allow her to go home with Gundlach. Then Reynolds planned a surprise reunion for Gundlach and Casey.

This week Gundlach traveled to Iowa believing he would have to go before government officials and argue his case to adopt Casey. When Gundlach arrived he was told his meeting had been delayed and Reynolds asked him to come down to the rotunda for an Armed Services Day celebration while he waited. The actual celebration waiting there though was for Gundlach and Casey. Hundreds of people who were in on the secret waited as Casey was brought out and the emotional reunion that Gundlach had been hoping for came true.

Casey was officially retired from her service with the State Fire Marshal’s Office and now gets to go home with the Marine who has promised to give her the best life she can have.