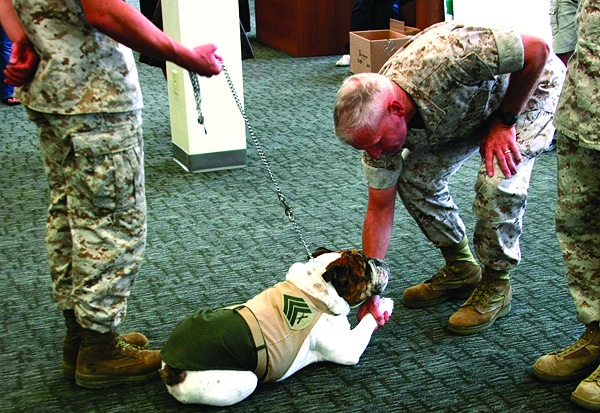 Sgt. Archibald Hummer, the mascot for Marine Corps Recruit Depot Parris Island, shakes hands with Col. Brian T. Palmer, commanding officer, Headquarters and Service Battalion, after receiving his meritorious promotion to the rank of sergeant July 22 at the public affairs office. Hummer achieved the distinction of becoming one of the only depot mascots in history to earn the rank.

This milestone in his career came after he earned his gray belt in the Marine Corps Martial Arts Program, lost 20 percent of his body mass over two years, earned a good conduct medal and made enormous contributions to public relations aboard the depot. Hummer has served in his meritorious assignment as mascot since early 2006 – more than 35 dog years.

Now that he is a sergeant, Hummer plans to lead his Marines in daily tug-o-war physical training sessions to develop their core strength, and continue his volunteer efforts in the community.