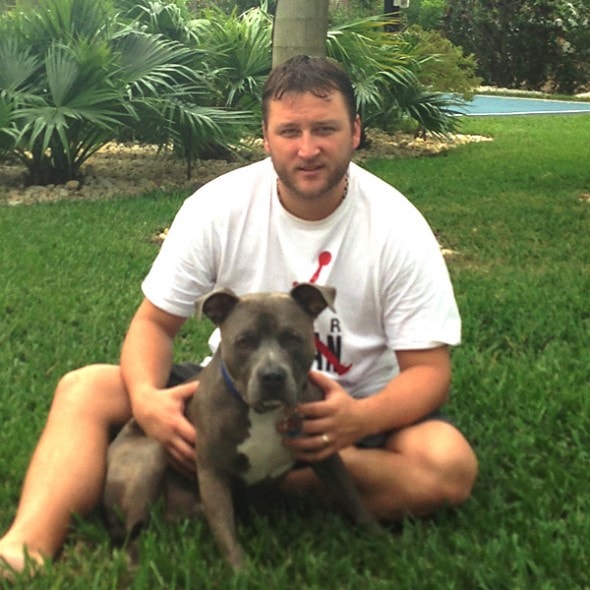 Mark Buehrle and his pit bull Slater are making news once again. Buehrle has run into issues with breed specific bans, but he has most recently been traded to the Toronto Blue Jays. The entire province of Ontario prohibits pit bulls, leaving Buehrle and his family with a difficult decision.

Last year Buehrle and Slater made headlines when Buehrle signed a contract with the Miami Marlins. Miami-Dade County prohibits pit bulls, so Buehrle and his family had to buy a home outside of Miami to keep their dog.  The Buehrle family used the opportunity to speak out against breed specific legislation.

With Buehrle’s trade to Toronto, the solution for Slater and the Buehrle family wasn’t as easy as it was in Miami. The entire province of Ontario outlaws pit bulls. This means the family would likely have to be split up in some way. Slater would be left behind in someone’s care for the season, Buehrle would go to Toronto on his own, or the family would stay and Buehrle would have to commute 90 minute each way from Niagara Falls. The Buehrle’s chose to keep Slater with the family and send Mark alone to Toronto.

“We’re not trying to make people feel sorry for us,” said Buehrle. “Obviously they’re going to say, ‘You make a lot of money. Boo hoo.’ I know it’s a part of baseball and every person deals with it, but this is our first time being away from each other all season…those nights when we have a Sunday day game and I can go home and have dinner with the family and give the kids a bath and put them to bed, that’s what I’m going to miss.”

Although many people offered to keep Slater for the Buehrles, that option wasn’t one they were willing to consider. “To me, that would be like if we moved somewhere that only allowed boys,” said Buehrle’s wife Jamie. “I wouldn’t leave my daughter behind. Six or seven months is a lot of time. Slater would adjust. He’s really easygoing. But I don’t want him to bond with someone else. He’s our dog. That wasn’t really an option.”

Jamie and Mark Buehrle have been long-time animal advocates. The family owns four dogs and rescued Slater 24 hours before he was to be euthanized. Slater has received his Canine Good Citizenship award and is an aspiring therapy dog. Despite Slater’s training he’s not been welcome now in two cities where Buehrle has played. The Buehrles, like others who own pit bulls and are against breed specific legislation, identify that the problem is not the breed but reckless owners.

Numerous organizations argue that breed specific bans are ineffective. “Bottom line, a pit-bull ban that keeps the compassionate, loving Buehrle family from staying together, as a ban in Toronto does, can’t be right,” said Cynthia Bathurst, executive director of Safe Humane Chicago. “It’s very impressive that Mark and Jamie put their family and compassion first, and they should be emulated. It doesn’t matter how much or how little money someone has.”